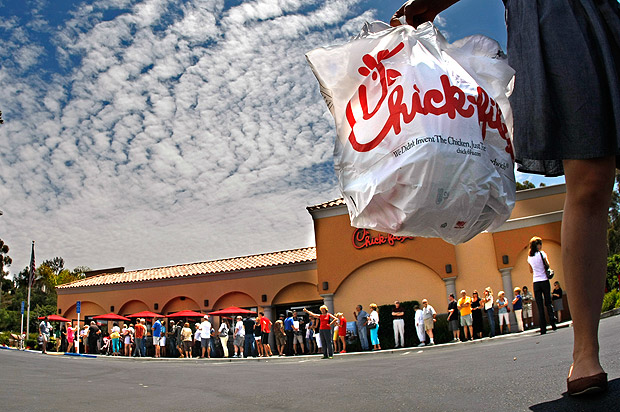 The criticism over Chick-fil-A chief executive Dan Cathy’s opposition to gay marriage moved hundreds of counter-protesters across California to show their support for the fast-food chain.

A line of hundreds of people formed outside a Northridge Chick-fil-A on Wednesday afternoon as crowds flocked to the restaurant.

Mark Almlie, 39, said he’s never had Chick-fil-A, but drove from Simi Valley to the restaurant Wednesday to support “people that will stand up for what they believe in.”

â€œThis man has the courage to stand up and back what he says, and also this is America, we have a right to say what we want to say in our business. This is his business,â€ Mary Helen McFarlandÂ told KCBS-TV,Â referring to Chick-fil-A’s chief executive.

Gwilym McGrew, who drove to the fast-food restarauant from Woodland Hills, said more than 100 cars were waiting along Tampa Avenue to pull into the parking lot. “A couple hundred” people had lined up on foot, he said, some drinking water distributed by employees.

McGrew was one of many people who ventured to the restaurant to show support for Chick-fil-A, which drew criticism after Cathy recently said he and his company were against gay marriage. The comments drew strong reactions, with customers pledging to boycott the chain and some mayors proclaiming they would not allow Chick-fil-A to open in their cities.

McGrew said he came to the restaurant to support Cathy’s religious beliefs, even though he said he himself is not religious.

Customers said they waited in line for about 20 minutes, and were told it would take about an hour longer before they were able to order their food.

Earlier Wednesday, more than a dozen people stood outside the Northridge Chick-fil-A, waving American flags and holding signs that read, “Free to speak, to build, to boycott.” The event was organized by the San Fernando Valley Patriots, a local arm of the tea party.

“That man â€” just like you or I â€” has a right to say, ‘This is what I believe’ and not be punished for it,” Karen Kenney of the San Fernando Valley Patriots toldÂ KTLA.

The Northridge restaurant declined to comment and referred questions to the company’s corporate office. 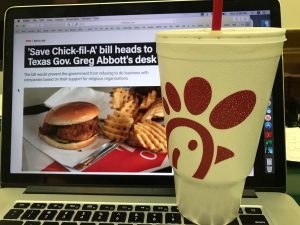 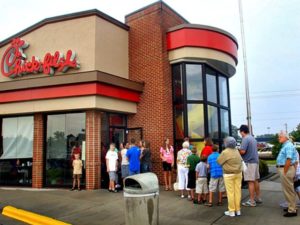 To GHod be the Glory for Mr. Dan Cathy abd the Cathy family. God will honor those who honor Him and His Word. God & His people will take care of Chick Fil A.