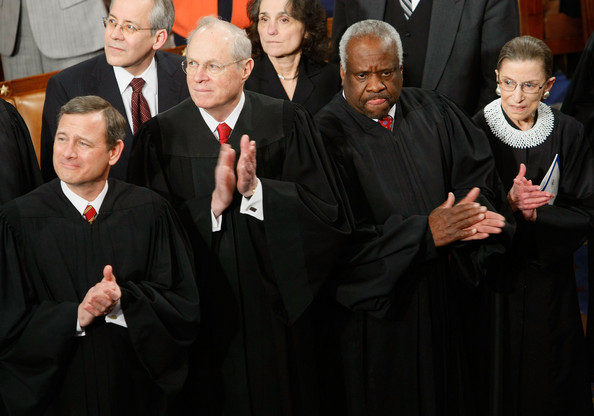 The simmering feud between the White House and the Supreme Court is getting a little hotter – and lawmakers on Capitol Hill are helping fan the flames.

Chief Justice John G. Roberts Jr.’s impromptu portrayal Tuesday of President Obama’s attacks on the high court during the State of the Union address as “very troubling” drew a brusque retort from the White House, which called the court’s campaign finance ruling the real problem, and from Democrats eager to attack the court.

Responding to a law student’s question when speaking at the University of Alabama, Chief Justice Roberts took aim at Mr. Obama’s public chiding in January, saying the annual speech to Congress has “degenerated into a political pep rally.” The chief justice, whose nomination by President George W. Bush was opposed by Mr. Obama as a senator, said he accepts criticism but suggested that detractors should be mindful of “the setting, the circumstances and the decorum.”

“The image of having the members of one branch of government standing up, literally surrounding the Supreme Court, cheering and hollering while the court – according to the requirements of protocol – has to sit there expressionless, I think is very troubling,” Chief Justice Roberts said, wondering why the justices bother to show up since presidential addresses to Congress have “degenerated into a political pep rally.”

“What is troubling is that this decision opened the floodgates for corporations and special interests to pour money into elections – drowning out the voices of average Americans,” Mr. Gibbs said.

“The president has long been committed to reducing the undue influence of special interests and their lobbyists over government. That is why he spoke out to condemn the decision and is working with Congress on a legislative response to close this loophole,” Mr. Gibbs said.

At issue is the high court’s opinion in the Citizens United case, in which a 5-4 majority concluded that the First Amendment prohibits limits on corporate funding of independent political broadcasts. While most Republicans have hailed the decision as a victory for free speech, congressional Democrats have been working feverishly on a bill that would blunt the impact of the decision on this year’s midterm elections.

“With all due deference to the separation of powers, the Supreme Court reversed a century of law to open the floodgates for special interests – including foreign corporations – to spend without limit in our elections,” Mr. Obama said in his January address.

The justices present remained silent as applauding Democratic lawmakers leapt to their feet, though Justice Samuel A. Alito Jr. was seen shaking his head and muttering under his breath.