Christie rallies GOP in keynote speech, emphasizes ‘respect’ over ‘desire to be loved’ 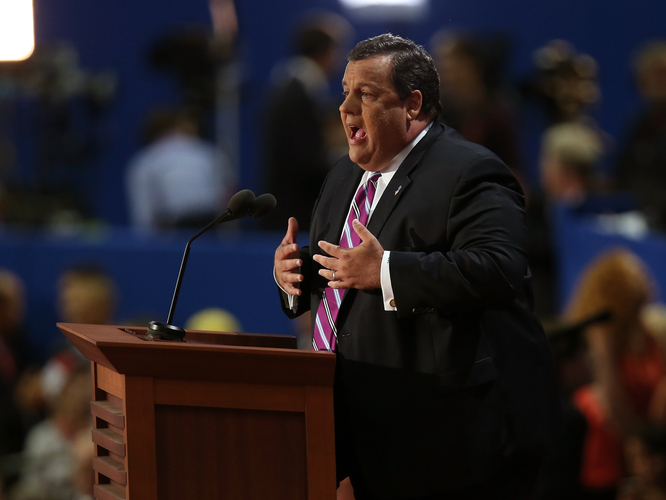 TAMPA, Fla. â€“ Â New Jersey Gov. Chris Christie called on the Republican Party Tuesday night in Tampa to heed the advice of his late mother â€“ when given the choice between being loved and being respected, â€œalways pick being respected.â€

The advice kicked off the governorâ€™s keynote address at the Republican National Convention on a characteristically tough note. He introduced himself to the national audience as the â€œproudâ€ son of a hard-working family, and a Democrat-leaning state.

Teeing up a theme of his address, Christie said his mother taught him to â€œspeak from the heart and to fight for your principles.â€

â€œShe never thought you get extra credit for just speaking the truth,â€ he said. â€œThe greatest lesson Mom ever taught me, though, was this one: she told me there would be times in your life when you have to choose between being loved and being respected. She said to always pick being respected, she told me that love without respect was always fleeting.â€

He added: â€œI believe we have become paralyzed, paralyzed by our desire to be loved.â€

Christieâ€™s speech was highly anticipated, as Republicans were depending on him to not only energize a convention delayed and overshadowed by Hurricane Isaac but make the case — to Republicans, Democrats and independents — for Mitt Romney.

Romneyâ€™s wife Ann offered the personal touch, telling stories about the newly anointed GOP nominee that only she would know in an earlier address. But it was Christieâ€™s job to bring the rhetorical firepower, and energize a party that for months â€“ years, really â€“ has been divided over Romneyâ€™s bid for the presidency.

Christie sought to leave no doubt that now is the time for Republicans to rally around that man.

For Christie himself, the address was also a chance to burnish his national stage presence, perhaps in preparation for a presidential run sometime in the future. The governor was eyed as a possible Romney running mate this year, but insisted all along he wasnâ€™t interested in leaving Trenton right this moment. Republicans this week knocked down a report that the reason he wasnâ€™t interested was he didnâ€™t think Romney could win.