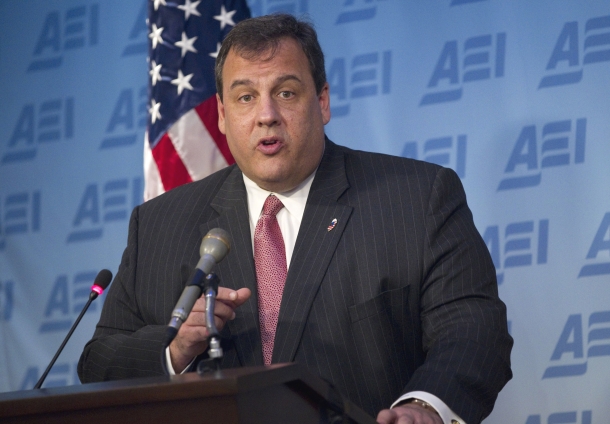 Daniels, a former budget director under PresidentÂ George W. Bush, told Bloombergâ€™sÂ Al Hunt on May 6 that he would announce whether he is running within weeks.

â€œHeâ€™s certainly somebody who I have enormous respect for and would give real consideration to supporting,â€ Christie said today on CBS Corp.â€™sÂ 1210 WPHT, a Philadelphia news-talk station.

Christie said he wants his partyâ€™s 2012 nominee to have gubernatorial experience.

â€œGovernors have tended to be some of our best presidents,â€ Christie said. â€œWhen you have executive responsibilities and youâ€™re the one who has to make decisions, it trains you.â€

Christie, 48, has become a rising national star in theÂ Republican Party after he cut $10 billion in spending on schools, pensions and local aid in his first budget. He has said repeatedly that has no plans to run, even as the New York PostÂ reported that his supporters in Iowa plan to meet with him this month to persuade him to seek the nomination.

Christie has met with potential Republican challengers to President Barack Obama including former governors Mitt Romney of Massachusetts and Tim Pawlenty of Minnesota. He also said he plans to meet with former Utah governor and ambassador to ChinaÂ Jon Huntsman.

Christie said he would back a nongovernor only if he or she proves to be the strongest candidate to face Obama. American politicians can no longer be drafted reluctantly to seek the presidency, the governor said.

â€œThe American people want to see you out there seeking it and making your case,â€ he said during the live interview with host Chris Stigall.

Christie also appeared today on radio station WOR inÂ New York, touching on presidential politics and his refusal to repay $271 million in federal funds in connection with his decision to cancel a commuter-rail tunnel to New York.

On May 6, he told the audience of New Yorkâ€™s WFAN that the cast of MTVâ€™s â€œJersey Shoreâ€ television reality show should get out of New Jersey.