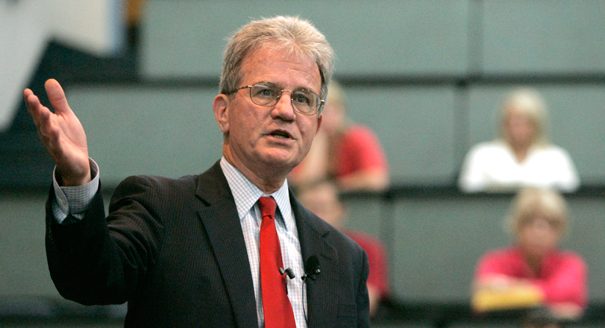 WASHINGTON â€” One of the Senate’s staunchest budget-cutters unveiled Monday a massive plan to cut the nation’s deficit by $9 trillion over the coming decade, including $1 trillion in tax increases opposed by most of his fellow Republicans.

The plan by Sen. Tom Coburn, R-Okla., is laced with politically perilous proposals like raising to 70 the age at which people can claim their full Social Security benefits. It would cut farm subsidies, Medicare, student aid, housing subsidies for the poor, and funding for community development grants. Coburn even takes on the powerful veterans’ lobby by proposing that some veterans pay more for medical care and prescription drugs.

Coburn would also eliminate $1 trillion in tax breaks over the coming decade, earning him an immediate rebuke from Americans for Tax Reform, an anti-tax organization with which Coburn has had a running feud. He would block taxpayers from claiming the mortgage interest deduction on second homes and limit it to homes worth $500,000. He would also ease taxpayers into higher tax brackets more quickly by using a smaller measure of inflation to adjust the brackets.

Coburn was a member of President Barack Obama’s fiscal commission and voted for its plan to cut the budget by about $4 trillion over a decade. He recently dropped out of the closely watched “Gang of Six” senators seeking a bipartisan agreement to rein in deficits and break through the partisanship engulfing official Washington over the deficit.

His re-entry into the deficit debate comes as Obama and lawmakers struggle over increasing the so-called debt limit and avoid a first-ever default on U.S. obligations.

Coburn’s $9 trillion savings figure doesn’t include another $2.4 trillion in cuts to Social Security that are funneled back into the program. In addition to raising the retirement age gradually, he would peg future benefits to a less-generous measure of inflation and curb benefit increases even more for the top 40 percent of earners.

Cuts to the Medicare program for the elderly and the Medicaid health plan for the poor and disabled would total $2.6 trillion over 10 years, far more than proposed by the fiscal commission or House Republicans. He proposes raising the Medicare retirement age to 67 by 2027 and then gradually increasing it until the retirement age hits 69 in 2080. It would also raise Medicare premiums for doctor visits so that premiums pay 35 percent of such costs instead of the 25 percent currently covered.

Coburn would cut $1 trillion from the Pentagon budget over a decade. He would block military retirees from the Tricare Prime health care plan, the option with the lowest out-of-pocket cost, saving $115 billion, and he would raise the prescription drug copayment under the program, as well as require higher out-of-pocket fees. He also would reduce the fleet of aircraft carriers from 11 to 10 and Navy air wings from 10 to nine.

“I have no doubt that both parties will criticize portions of this plan, and I welcome that debate,” Coburn told reporters. “But it’s not a legitimate criticism until you have a plan of your own.”