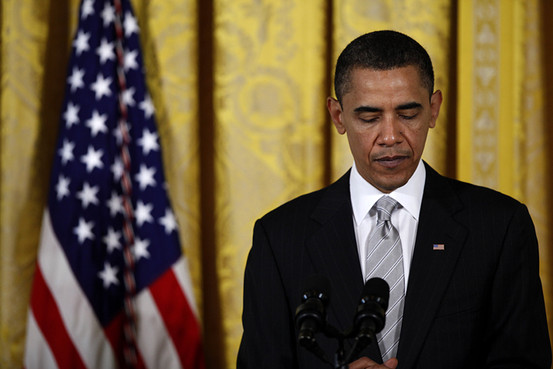 Americans are more pessimistic about the state of the country and less confident in President Barack Obama’s leadership than at any point since Mr. Obama entered the White House, according to a new Wall Street Journal/NBC News poll.

The survey also shows grave and growing concerns about the Gulf oil spill, with overwhelming majorities of adults favoring stronger regulation of the oil industry and believing that the spill will affect the nation’s economy and environment.

Sixty-two percent of adults in the survey feel the country is on the wrong track, the highest level since before the 2008 election. Just one-third think the economy will get better over the next year, a 7-point drop from a month ago and the low point of Mr. Obama’s tenure.

Amid anxiety over the nation’s course, support for Mr. Obama and other incumbents is eroding. For the first time, more people disapprove of Mr. Obama’s job performance than approve. And 57% of voters would prefer to elect a new person to Congress than re-elect their local representatives, the highest share in 18 years.

The results show “a really ugly mood and an unhappy electorate,” said Democratic pollster Peter Hart, who conducts the Journal/NBC poll with GOP pollster Bill McInturff. “The voters, I think, are just looking for change, and that means bad news for incumbents and in particular for the Democrats.”

Mr. McInturff said voters’ feelings, typically set by June in any election year, are being hardened by frustration over the economy and the oil spill. “It would take an enormous and seismic event to change the drift of these powerful forces before November,” he said.

Mr. McInturff added that any “little, faint signs” in the spring that voters were adopting a more optimistic outlook have now been “squished by feelings from this oil spill.”

For Democrats, the results underscore the potential for major losses in November. Both parties have been forced to contend with an anti-establishment wave this year. But Republicans, through strong fund raising and candidate recruitment, have put enough seats in play in the House and Senate to give the GOP a realistic shot at winning control of both chambers.

Support for Mr. Obama and his party is declining among centrist, independent voters. But, more ominous for the president, some in his base also are souring, with 17% of Democrats disapproving of Mr. Obama’s job performance, the highest level of his presidency.