Corporations under pressure on political spending 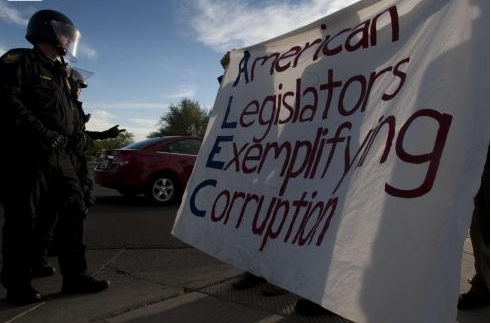 WASHINGTON â€“ American companies are discovering the perils of politics as activists and public pension fund officials apply new pressure on corporations to disclose their political spending â€” or cease it entirely.

Companies holding their annual meetings this spring will face a record number of shareholder resolutions demanding companies reveal whether corporate funds have been spent on politics. A coalition that includes Public Citizen, Common Cause and other groups that favor campaign limits has asked the Securities and Exchange Commission to require publicly traded companies to disclose campaign spending on their filings to regulators.

And in recent days, Wendy’s and several of the nation’s most recognizable companies have dropped their affiliation with the American Legislative Exchange Council, a conservative group linked to the spread of Stand Your Ground laws and state efforts to toughen voter identification rules. The companies’ actions came after a civil rights group, ColorOfChange, spotlighted the firms’ ties to ALEC.
Wendy’s joined Coca-Cola, McDonald’s, PepsiCo and other well-known consumer brands in cutting ties to ALEC.

The clamor about corporate political activity has grown louder as outside money plays a bigger role in elections. Federal court rulings, including the 2010 Supreme Court decision known as Citizens United, paved the way for corporations to make unlimited political donations for candidate attack ads straight from their corporate accounts â€” rather than through employee-funded political action committees.

Spending by super PACs and other outside groups passed the $100-million mark this month. Experts say far more could be spent by other groups, such as trade associations, that don’t have to disclose their donors â€” corporate or otherwise â€” in the seven months between now and Election Day.