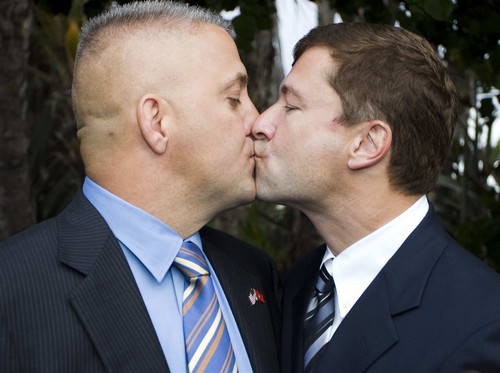 Gay-rights advocates scored a major victory Thursday as a federal judge in Boston ruled that the Defense of Marriage Act â€” a measure Congress passed in 1996 to prevent the federal government from recognizing same-sex marriageâ€”is unconstitutional.

Judge Joseph Tauro said the federal government essentially had no business seeking to regulate marriage rules, which he said have traditionally been the exclusive province of the states.

â€œThe governmentâ€™s argument assumes that Congress has some interest in a uniform definition of marriage for purposes of determining federal rights, benefits, and privileges. There is no such interest,â€ Tauro wrote in ruling on a pair of lawsuits challenging the anti-gay marriage law known as DOMA.

â€œImportantly, the passage of DOMA marks the first time that the federal government has ever attempted to legislatively mandate a uniform federal definition of marriageâ€“or any other core concept of domestic relations, for that matter.â€

â€œCongress undertook this classification for the one purpose that lies entirely outside of legislative bounds, to disadvantage a group of which it disapproves. And such a classification, the Constitution clearly will not permit,â€ Tauro wrote.

The Justice Department had no immediate comment on the rulings, but lawyers on various sides of the issue said it was a certainty that the government will appeal and likely that the cases will reach the Supreme Court.

Nevertheless, a plaintiff in one of the suits hailed the decision as major advance for same-sex couples. â€œI am so happy I canâ€™t even put it into words,â€ said Nancy Gill, a postal employee seeking health benefits for her female spouse. â€œI couldnâ€™t in my wildest dreams see how anybody could deny usâ€¦. It just never seemed fair to me that I could be married and not be treated like a married couple by my employer.â€

â€œToday is a victory for civil rights in Massachusetts,â€ said Massachusetts Attorney General and unsuccessful senate candidate Martha Coakley, whose office brought the other lawsuit, which challenged DOMA impact on states.