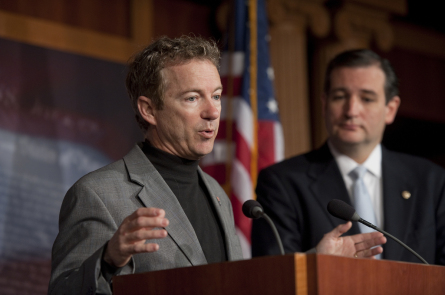 Sen. Ted Cruz announced Wednesday that he is backing an effort by fellow Republican Rand Paul of Kentucky to get a vote on auditing the Federal Reserve as a condition for considering the nomination of Janet L. Yellen to be chairwoman of the Fed.

“I agree with Rand Paul: before the Senate votes on whether to confirm Janet Yellen, we should at the very least allow a vote on the Audit the Fed bill,” the Texas Republican said in a statement. “The Federal Reserve has expanded our money supply by trillions, benefiting Wall Street but making life harder for millions of Americans struggling to make ends meet.”

Paul and Cruz cannot block Yellen’s confirmation because Senate supporters could work around them with a cloture vote to limit debate and avert a possible filibuster.

However, if the senators could rally support within the Senate Republican Conference, they could get the vote on the Federal Reserve audit as a condition for moving the nomination forward.

It isn’t clear yet what the appetite among the Senate GOP (as well as supporters of the audit within the Democratic caucus) would be for such a move.