WOODBRIDGE — Republican Kenneth T. Cuccinelli got a boost from two midwestern Republican heavyweights Saturday as he tried to spur his voters to the polls by casting Tuesday’s gubernatorial election as a referendum on President Obama’s health care overhaul.

“I’m here today, along with the support from other governors across the country, to testify that Ken Cuccinelli has what it takes to be a great leader for this state,” Mr. Walker said at a get-out-the-vote rally in Prince William County. “This is someone who throughout his entire adult career has fought for the hardworking taxpayers in the commonwealth…this guy was the first guy in America to stand up and point out the problems with Obamacare – the problems that not only Virginia now knows, the entire country now knows, is the problems with Obamacare.”

Indeed, Mr. Cuccinelli was the first attorney general in the country to sue over the law after it was passed in March 2010, and has gone all in recently on highlighting the botched roll-out and issues with healthcare.gov as a key difference between he and Democrat Terry McAuliffe.

“This is a referendum on Obamacare, and to help us clarify that point, the president is coming tomorrow,” he told a crowd outside of a GOP office in Prince William, drawing scattered boos. 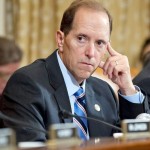 Obamacare is already a disaster where hospitals and doctors are turning away people on any government heath care like medicare, medicaid, and obamacare and only except people who are fairly wealthy or have private insurance that will pay for the care given. Cuccinelli is the guy we want!

The Virginia election is a referendum on a man who lives in the Middle Ages and believes everyone else should as well. Have a look at the list of outrageous things he has done and tried to do. The severe technical screw ups in implementing the ACA makes a fine screen for Cuccinelli to hide all the malevolent things he had done and stands for.