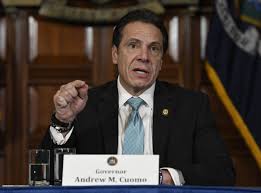 New York State is facing a $2.3 billion budget deficit, and Gov. Andrew Cuomo believes it’s largely due to the Trump administration’s tax reforms which, on the “flip side,” have taxed the rich and may be encouraging wealthy residents to leave.

President Trump’s Tax Cuts and Jobs Act, which takes effect for the 2018 tax year, places a cap on the state and local tax deduction (known as SALT) that Americans can take. Residents of largely blue states with relatively high state and local taxes are adversely affected, Cuomo says, by the new cap of a $10,000 deduction. New York state’s average SALT deduction was around $22,000 before the law changed.

“We’ve set up reserves, but this is worse than we had anticipated,” Cuomo said at a state Capitol news conference in Albany on Monday after referring to the fiscal situation as being “as serious as a heart attack.”

The extreme dip in collections has made Cuomo’s $175 billion state budget proposal, which he offered just last week, “unsupportable,” he said. He added that he plans to make adjustments in the coming weeks.