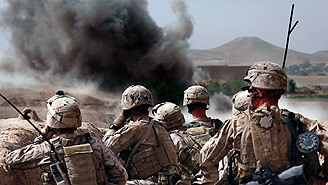 The Obama administration condemned the unprecedented leak of thousands of classified documents on the Afghanistan war, saying website Wikileaks.org “made no effort” to contact the federal government before releasing them but that the “irresponsible leaks” would not hurt the war effort.

The 91,000 classified U.S. records on the war, marking one of the largest unauthorized disclosures in military history, also cover a period time that largely predates the Obama administration as well as the new strategy and surge announced at the end of 2009. They apparently cover a period from January 2004 to December 2009.

The documents cover much of what the public already knows about the troubled nine-year conflict: U.S. spec-ops forces have targeted militants without trial, Afghans have been killed by accident, and U.S. officials have been infuriated by alleged Pakistani intelligence cooperation with the very insurgent groups bent on killing Americans.

National Security Adviser Gen. James Jones said in a written statement that relations with the Pakistanis and other trouble spots have improved since the end of 2009.

“On December 1, 2009, President Obama announced a new strategy with a substantial increase in resources for Afghanistan, and increased focus on Al Qaeda and Taliban safe-havens in Pakistan, precisely because of the grave situation that had developed over several years,” he said.

Jones lambasted Wikileaks.org for releasing the massive trove of documents.

“The United States strongly condemns the disclosure of classified information by individuals and organizations which could put the lives of Americans and our partners at risk, and threaten our national security,” he said. “Wikileaks made no effort to contact us about these documents — the United States government learned from news organizations that these documents would be posted. These irresponsible leaks will not impact our ongoing commitment to deepen our partnerships with Afghanistan and Pakistan; to defeat our common enemies; and to support the aspirations of the Afghan and Pakistani people.”

WikiLeaks posted the documents Sunday. The New York Times, London’s Guardian newspaper and the German weekly Der Spiegel were given early access to the records.

WikiLeaks founder Julian Assange, who held a press conference in London to address the documents, said Monday his organization has “no reason to doubt the reliability” of the records. He said the records will “shape an understanding” of the war’s first six years, though he said the documents did not include any “top secret” information.

He claimed that “there does appear to be evidence of war crimes in this material,” in a reference to at least seven reported civilian casualties.

A White House aide said many of the concerns addressed in the documents had been addressed publicly by U.S. officials. The aide also said Wikileaks.org is not an objective news organization, but a group that opposes the Afghanistan war.