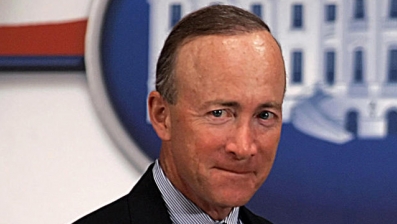 After months of stewing and despite widespread encouragement from many within his party, Indiana Gov. Mitch Daniels sent out an e-mail to supporters early Sunday saying he had decided against jumping into the 2012 presidential race.

The decision is sure to disappoint the governor’s many supporters, among them several prominent Republican governors who thought Mr. Daniels’s deep rÃ©sumÃ© and record as cost-cutter in Indiana would add ballast to the 2012 GOP field.

In the end, he said, the decision came down to family. “I was able to resolve every competing consideration but one, but that, the interests and wishes of my family, is the most important consideration of all,” he said in an e-mail sent after midnight.

Mr. Daniels, a two-term governor who had worked the administrations of both George W. Bush and Ronald Reagan, had often expressed concerns about the strains a national campaign would put on his wife and four adult daughters.

His decision to stay out of the race eliminates one of the last big Republicans still known to be eyeing a presidential campaign and rounds out a week that also saw two other well-known figuresâ€” Mike Huckabee and Donald Trumpâ€”take their names out of contention.

“If I have disappointed you, I will always be sorry,” Mr. Daniels wrote. “If you feel that this was a non-courageous or unpatriotic decision, I understand and will not attempt to persuade you otherwise. I only hope that you will accept my sincerity in the judgment I reached.”