Debra Medina, new star of America’s right, is firing up the race for Texas governor 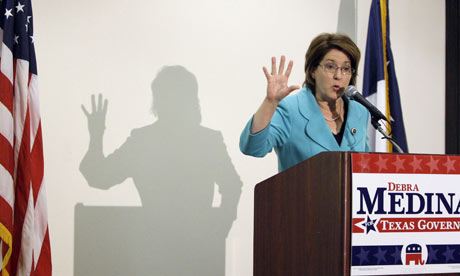 Lytle is a blink-and-you’ll-miss-it kind of town, one of hundreds that dot the vast flat ranchlands of southern Texas. A smear of houses by the main highway between San Antonio and Laredo. Population: 2,383. The first streets only got paved here in the years after the second world war. A sewage system took a little longer, not being built until the 1960s. In short, Lytle, Texas, has never been big enough to have much impact on the politics of the Lone Star state. And few Texas politicians have ever paid much attention to it.

Until Debra Medina, that is. When Medina breezed into Lytle’s community hall the locals found themselves confronted with a Texan version of Sarah Palin. She wore a sharp scarlet skirt suit, librarian-style glasses and a puffed-up hairdo. More than 60 Lytle residents had gathered to meet her, a hefty turnout on a weekday at 11am for a Republican primary election in the race to be Texas governor. Medina has become a political phenomenon in Texas. Emerging as a genuine star of the rightwing populist Tea Party movement, she delivers a fiery message of slashing taxes and the abolition of almost all forms of federal government, and issues dire warnings that President Obama is taking America down a slippery slope to Soviet-style communism.

It’s working. Previously unheard of by the vast majority of Texans, Medina has set the race for governor on fire, upsetting the primary contest between the incumbent, Rick Perry, and Senator Kay Bailey Hutchison.