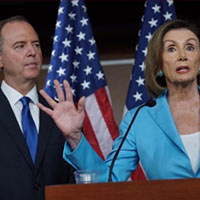 House Intelligence Committee Chairman Adam Schiff will open the public impeachment process Wednesday without the bipartisan praise for when Republicans launched the effort to oust Clinton on Oct. 5, 1998.

In fact, the Republicans are so deeply opposed to the process Democrats have established for conducting the impeachment proceeding, almost all of them have signed onto a measure to censure Schiff for “conduct that misleads the American people in a way that is not befitting an elected Member of the House of Representatives.”