Democrats say they have votes to pass healthcare 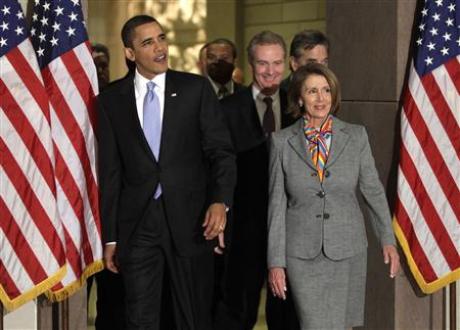 An upbeat House Democratic leader Steny Hoyer predicted victory in Sunday’s vote on the biggest revamp of the $2.5 trillion healthcare system in four decades, although even the most optimistic Democrats expected a razor-thin margin.

House Democratic leaders spent Saturday in a whirlwind of closed-door meetings and conversations on the House floor with wavering party members as they tried to nail down the 216 votes needed for final approval.

President Barack Obama traveled to Capitol Hill to rally support and urged House Democrats to “stand up” and take what he acknowledged could be a tough vote politically.

Senate Democratic leader Harry Reid joined Obama at the rally and told House Democrats he had commitments from “a good majority” of the 100-member Senate to pass the changes to the healthcare bill the House will take up on Sunday.

Reid’s office released a letter to Pelosi from Senate Democrats pledging their support for the changes, which they would take up once they are approved by the Senate, but did not say how many senators had signed it.

Under heavy Republican criticism and pressure from some Democrats, Democratic leaders backed away from a controversial proposal to pass the Senate bill, which is unpopular with House Democrats, without a direct vote.

Democratic aides said instead the House will take at least three votes on Sunday — on the rule setting the process, the revisions to the Senate bill sought by House Democrats and on the Senate bill itself.

“We believe this is a better process,” Hoyer said.

“They will have to vote on the Senate-passed bill, stuffed with tax hikes, Medicare cuts, and infamous backroom deals, and they will vote on something worse: their ‘fix’ with more taxes, more Medicare cuts and new special deals,” House Republican leader John Boehner said.

The political battle over healthcare reform has consumed Congress for more than nine months, putting a dent in Obama’s approval ratings and worrying Democratic lawmakers who face re-election in November.

The overhaul, Obama’s top domestic priority, would expand coverage to 32 million uninsured Americans and ban insurance practices like refusing coverage to those with pre-existing medical conditions.

It would require all Americans to have health insurance but give subsidies to help lower-income workers pay for it and set up exchanges where individuals and groups could shop and compare insurance plans.

The House Rules Committee met into the evening on Saturday to set the debate rules and the process for passing the legislation on Sunday.

If the Senate’s version of the bill is approved on Sunday, it will become law once signed by Obama. The package of revisions designed to win over wavering House Democrats would move in a separate bill the Senate would take up next week.

House Democrats, who passed their version of the overhaul with three votes to spare in November, picked up seven new converts in recent days who said they would switch their November votes to “yes” from “no.”

Democratic leaders ruled out a separate vote on adding more strict anti-abortion language to appease a handful of Democratic holdouts who are abortion rights opponents, another sign Democrats were growing confident.

“We have an agreement with the Senate — this is what we are passing in both houses,” House Speaker Nancy Pelosi said of the healthcare package.

Democratic leaders had worked for days to heal a rift with a small group of abortion rights opponents led by Democratic Representative Bart Stupak. They threatened to oppose the bill unless the ban on using federal funds for abortion was strengthened.

Democrats said the concerns of Stupak’s group might be met if Obama issued an executive order clarifying the ban.

As Democrats tried to line up votes for Sunday, thousands of conservative “Tea Party” protesters gathered outside the Capitol, waving yellow “Don’t Tread on Me” flags and chanting: “Kill the Bill.”