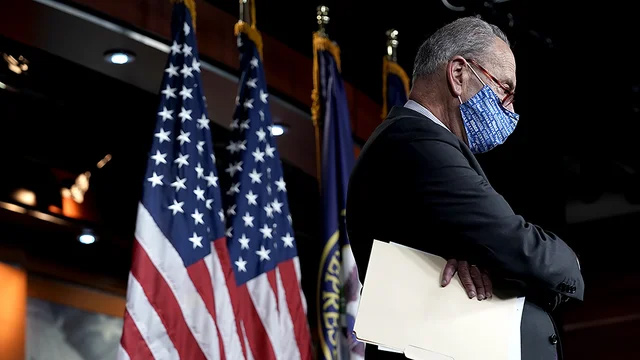 Senate Minority Leader Charles Schumer (D-N.Y.) is in listening mode as colleagues are venting their disappointment over falling short once again of winning back the Senate majority.

Schumer has presided over two conference calls in which his fellow Democratic senators analyzed the disappointing results of races in Iowa, Maine, Montana, North Carolina where they thought they had a chance to knock off GOP incumbents.

So many Democratic senators wanted to speak out during last week’s call that Schumer scheduled a rare Sunday conference call to give them a second chance to unburden themselves.

The senators spent close to 90 minutes on Sunday offering their views about why they failed to win back the Senate majority and what they must do to be more competitive in rural states, where Republicans traditionally have an advantage.

“We just got to do a better job of reaching out, we’re just not doing an adequate job,” said Sen. Jon Tester (D-Mont.), who represents a state where the Democratic governor was clobbered this year by Sen. Steve Daines (R-Mont.).

Tester and other Democrats say they expect Schumer to solicit more input from the conference on how to make their message more effective in 2022.

“We’re no way to a point where we’re going to be telling Chuck what to do but I think Chuck is going to be asking us for recommendations on what’s the best way to do that,” Tester said.

One Democratic senator who requested anonymity to talk about internal discussions said there are “huge amounts” of frustration.

“We shouldn’t have lost this election. You can explain it away but the reality is Republicans have been beating the hell out of government since the Reagan years and saying [Democrats] are the defender of bad government and that’s what the American people believe,” said the lawmaker.

A second Democratic senator who requested anonymity said colleagues were not in a good mood on Sunday’s call.

“It’s definitely not a tone in which people are thrilled,” said the lawmaker.

They picked up just one seat, despite prediction from the Cook Political Report and FiveThirtyEight.com that they’d win the majority.

Centrists on Sunday’s call talked about the need to come up with a better way to respond to the socialism tag that Republicans managed to put on Democratic candidates so successfully.

Sen. Joe Manchin (D-W.Va.) has been outspoken in public about how Democrats have been hurt in states such as his by being associated with Medicare for All and the Green New Deal.

Progressives argued that Republicans have moved further and further to the right and that Democrats have followed them in the rightward drift of American political debate that “we’re so disconnected from working Americans,” said the lawmaker.

Schumer has largely stayed quiet on the calls, giving his colleagues a chance to speak freely without interruption, Democratic senators say.

No one criticized Schumer’s leadership directly but there were some comments that were viewed as indirect criticisms of the Democratic Senatorial Campaign Committee.

Democratic senators said Schumer has done a good job maintaining relations within the Democratic caucus and keeping the party unified on key votes. Lawmakers said no colleague has offered himself or herself as a leadership alternative.

There was a discussion about the “DSCC endorsing candidates in primaries and not always getting it right and suppressing a legitimate battle that might have strengthened our hand in some way,” said the Democratic senator.

In particular, there’s some second-guessing of the DSCC’s decision to back Amy McGrath, a former Marine Corps fighter pilot, in the Kentucky Democratic primary over Charles Booker, a state representative.

Schumer played an active role in recruiting McGrath to take on Senate Majority Leader Mitch McConnell (R-Ky.), who wound up winning re-election by 20 percentage points, even after McGrath raised $90 million for her campaign.

There has also been grumbling about the Texas primary, which left MJ Heger as the party’s candidate against Sen. John Cornyn (R-Texas). Cornyn easily won reelection.

“There’s some feeling the DSCC should not be picking candidates before the primary,” a third Democratic senator said of the call with Schumer, referring to Kentucky and Texas.

“The polls were wrong” the lawmaker noted, and said his colleagues are trying to figure out “what went wrong in what we did.”

“The two most common knocks on our candidates were socialism and defund the police,” the lawmaker said, citing two effective attacks against Democratic Senate candidates.

Schumer on Tuesday said he viewed the feedback from colleagues as constructive and touted Joe Biden’s victory in the presidential race as the top Democratic priority heading into Election Day.

“We’ve had great feedback,” Schumer said of what he’s heard from colleagues. “Look, we did job No. 1 — no Donald Trump as president and Joe Biden as the next president and we’re all very happy with that.

While Democrats still have a chance of capturing control of the Senate if they win two runoff races in Georgia, though the odds of defeating both Sens. David Perdue (R-Ga.) and Kelly Loeffler (R-Ga.) are long.

Senate Democratic Whip Dick Durbin (Ill.) said his and his colleagues are still trying to figure out how the polls got some of the Senate races so wrong.

The party was optimistic about its chances of winning races in Maine and North Carolina, where polls had show the party’s candidates ahead.

“First, figure out why the polls were so wrong. Second, see if anything we could have said or done to change the outcome,” Durbin said. Colleagues have floated various theories about why they failed to win more races and how to improve their chances in 2022, he said.

Warren said she has urged colleagues to focus on issues that make a difference in people’s lives, such as relieving student debt obligations.

“I think we ought to be talking about the things that are very popular all across this country. Things like cancelling student loan debt and supporting universal childcare and not turning our country over to a bunch of lobbyists and corporate insiders,” she said Tuesday afternoon.