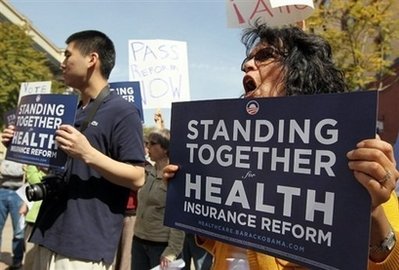 President Barack Obama scuttled an Asian trip in favor of last-minute lobbying at the White House on his signature issue, playing host to a procession of wavering Democrats seeking favors.

“It will make history and we will make progress by passing this legislation,” predicted House Speaker Nancy Pelosi as Democrats unveiled final alterations to a bill â€” 16 tumultuous months in the making â€” meant to expand health care to 32 million uninsured, bar the insurance industry from denying coverage on the basis of pre-existing medical conditions, and trim federal deficits by an estimated $138 billion over the next decade.

The health care portions of the bill would affect early every American and remake one-sixth of the national economy.

Beginning in 2014, most Americans would be required for the first time to purchase insurance, and face penalties if they refused. Millions of families with incomes up to $88,000 a year would receive government help to defray their costs. Large businesses would face fines if they did not offer good-quality coverage to their workers.

As Democrats trumpeted their bill, particularly its potential impact on the deficit, Republicans attacked it relentlessly as a government takeover of the health care industry financed by ever higher Medicare cuts and tax increases, including a new Medicare payroll tax on upper income wage earners.

“The American people are saying, ‘Stop’ and they’re screaming at the top of their lungs,” said House GOP Leader John Boehner of Ohio. Citing reports that Obama had told members of the Hispanic caucus that his presidency depends on the bill’s passage, he added, “I’m sorry, Mr. President, this isn’t about you.”

It was, though, at least in part, and has been ever since last summer, when Sen. Jim DeMint, R-S.C., predicted the bill’s defeat would mark Obama’s Waterloo.

Democrats set a Sunday showdown in the House, and while Pelosi and others expressed confidence about the outcome, Obama’s decision to put off a scheduled Asian trip until later in the year was a confession that the votes were not yet secured.

Support for the legislation appeared to be growing.

Rep. Bart Gordon of Tennessee, a moderate Democrat who is retiring at the end of the year, announced he would vote in favor of the bill after opposing an earlier version. He did so as Democratic leaders included in their revisions a provision worth an estimated $99 million over two years in higher Medicaid payments to Tennessee hospitals that treat large numbers of uninsured.

That made three conversions in recent days, following liberal Rep. Dennis Kucinich of Ohio, with the White House and congressional leaders in search of more.

In Washington’s time-honored tradition, the conversations with the president ranged widely. Rep. Luis Gutierrez of Illinois said he agreed to vote for the health care overhaul on the understanding that Obama and congressional Democrats would begin attempts quickly to pass comprehensive immigration legislation. Within hours, Senate Democrats unveiled a bill, and the president praised it in a written statement.

Obama and Democratic leaders focused their lobbying on two groups of Democrats, 37 who voted against an earlier bill in the House and 40 who voted for it only after first making sure it would include strict abortion limits that now have been modified.

After weeks of secrecy-shrouded meetings, Democrats unveiled 153 pages of last-minute changes that included another of Obama’s top priorities. Federally guaranteed student loans would now be made only by the government, ending a role for banks and other for-profit lenders who charge fees.

The savings, an estimated $60 billion over a decade, would increase the maximum Pell grants for needy college students as well as support for programs such as aid to historically black colleges, a priority of the Congressional Black Caucus.

As for health care, the additions fell generally into three categories.

â€¢ To address concerns of House Democrats, subsidies were raised by an estimated $25 billion over a decade for consumers who would face a first-ever requirement to purchase coverage.

â€¢ To ease concerns among governors, about $8 billion was added for 11 states and the District of Columbia, which already provide the level of Medicaid coverage that is required under the bill.

â€¢ Seniors who experience a gap in coverage in the Medicare prescription drug program would receive a $250 rebate this year â€” an election-year bragging point for Democrats as they look toward the fall campaign with control of Congress at stake.