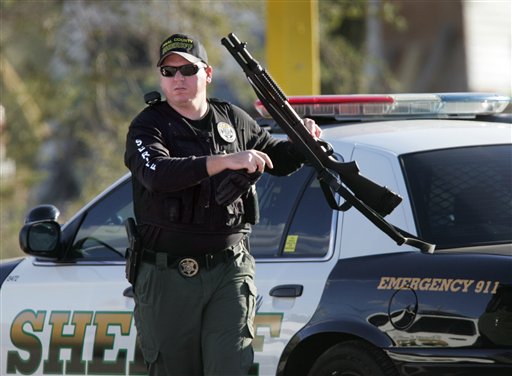 PHOENIX – A veteran sheriff’s deputy was shot and wounded Friday after encountering a group of suspected illegal immigrants who apparently had been hauling bales of marijuana along a major smuggling corridor in the Arizona desert- a violent episode that comes amid a heated national debate over immigration.

State and federal law enforcement agencies deployed helicopters and scores of officers in pursuit of the suspects after the deputy was shot with an AK-47 on Friday afternoon, and the search continued into the night. Deputy Louie Puroll, 53, had a chunk of skin torn from just above his left kidney, but the wound was not serious. He was released Friday night from Casa Grande Regional Medical Center.

The shooting was likely to add fuel to an already fiery national debate sparked last week by the signing of an Arizona law aimed at cracking down on illegal immigration in the state.

Puroll was found in the desert after a frantic hourlong search, suffering from a gunshot wound, Pinal County sheriff’s Lt. Tamatha Villar said. The 15-year department veteran had been performing smuggling interdiction work before finding the bales of marijuana and encountering the five suspected illegal immigrants, two armed with rifles.

“He was out on his routine daily patrol in the area when he encountered a load of marijuana out in the desert. He obviously confronted the individuals and took fire,” Villar told The Associated Press. “I was speaking with him just a bit ago, and he’s doing fantastic.”

The deputy was alone about five miles from a rest stop along Interstate 8, about halfway between Phoenix and Tucson. The area is a well-known smuggling corridor for drugs and illegal immigrants headed from Mexico to Phoenix and the U.S. interior.

“Over the past 12 months we’ve seen an increase in the amount of drugs, and an increase in violence that has been going on in this particular corridor,” Villar told KPNX.

“We’ve had increasing concerns in this area about being outmanned and outgunned, and unfortunately this evening, this is coming true,” she added.

The shooting came as Arizona grapples with backlash over its enactment of a tough new law targeting illegal immigration. Civil rights activists, concerned the law will lead to racial profiling, have called for a boycott of the state.

The law signed by Gov. Jan Brewer last week is supported by many in the state, which has become a major gateway for drug smuggling and human trafficking from Mexico.

Its passage came amid increasing anger in Arizona about violence, drug smugglers, drop houses and other problems caused by poor border security.

Villar said the search for the suspects involved numerous helicopters from state and federal law enforcement agencies and scores of officers near Interstate 8 and Arizona 84 about 50 miles south of Phoenix.

“The deputy is a search-and-rescue deputy, so its not uncommon for them to work those areas A) looking for drugs and B) looking for people who need assistance out there,” Villar said. “Obviously its a high-traffic area for drug- and human-smuggling.”