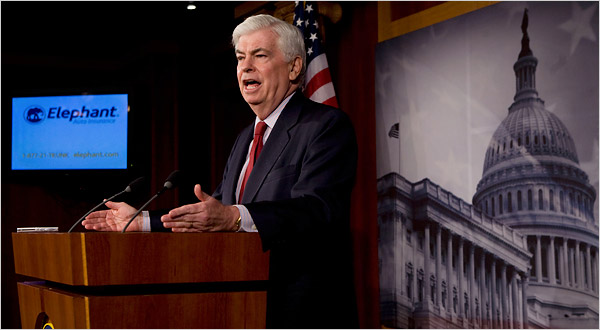 WASHINGTON â€” The chairman of the Senate Banking Committee will unveil on Monday a proposal to revamp the nationâ€™s financial regulations that would empower shareholders to have advisory votes on executive pay and to nominate directors for the boards of public companies through company proxy ballots, several people briefed on the draft legislation said Saturday.

The shareholder provisions, which have been vigorously opposed by many corporations and by Republicans, will be part of a bill that would amount to the most sweeping overhaul of financial regulations since the Depression. In one of the most fiercely debated provisions, the bill would create a consumer financial protection agency under the umbrella of the Federal Reserve, a move certain to disappoint liberal Democrats who believe the Fed failed to safeguard consumers in the years leading up to the banking meltdown.

With no Republican support yet for the proposal, Democratic lawmakers and the White House have been gearing up for a potentially bitter partisan fight.

The impending proposal by the chairman, Christopher J. Dodd of Connecticut, hews in many ways to a proposal advanced last summer by the White House, the people briefed on the legislation said.

Mr. Dodd said Thursday that Democrats would proceed on their own after months of stop-and-start negotiations with Republicans over a bipartisan compromise yielded little progress.

As Senate aides worked through the weekend on drafting the legislation, key elements became clear, according to the people briefed on the negotiations, who spoke on the condition of anonymity because the situation was still fluid.

The consumer financial protection agency would have a director appointed by the president and the ability to write rules governing mortgages, credit cards, payday loans and a wide range of other financial products.

It would have some ability to ensure that the rules are followed; how the rules would be enforced has been a major source of partisan division. As in a House version of regulatory overhaul adopted in December, the bill would, in some circumstances, restrict states from writing their own, stronger consumer protection rules.

The Federal Reserve would see its bank supervision powers significantly diminished. It would continue to oversee bank holding companies with $50 billion or more in assets, and would be entrusted to regulate systemically important nonbank financial institutions. Mr. Dodd had considered setting the threshold at $100 billion, which would have been even worse for the Fed.

Smaller bank holding companies, if they have a federal charter, would be overseen by a new regulator formed out of the Office of the Comptroller of the Currency, which already oversees national banks. The Federal Deposit Insurance Corporation, which already oversees state-chartered banks that are not members of the Fed system, would gain oversight over those that are.

The provision for shareholder input on executive pay would represent a significant shift in corporate governance, handing a victory to shareholder activists and investors, large and small. While â€œsay on pay,â€ as the provision is called, would be advisory and not binding, compensation consultants and the companies that use them fear that the provision would allow populist sentiment to boil over from annual meetings into boardrooms.

Giving shareholders a way to nominate their own slates of directors using the proxy ballots that companies mail to shareholders would be similarly unnerving for boards that customarily designate their own successors, with little input or opposition from stockholders.

The proposal would substantially alter the role of the Federal Reserve in protecting the economy, but the net effect would be a mixed outcome for the central bank.

On one hand, the Fed would be entrusted with oversight over all systemically important financial institutions, even if they are not banks. American International Group, the insurance giant that nearly brought down the financial system, was the most notorious example of such a company in the recent financial crisis. The Fed would also continue to oversee the nationâ€™s largest bank holding companies â€” those with assets of $50 billion or more, or about 35 companies.

In addition, investment banks like Goldman Sachs and Morgan Stanley, which converted to bank holding companies in 2008 to take advantage of the Fedâ€™s liquidity programs, would not be able to go back to their earlier status to avoid Fed oversight.

On the other hand, the Fed would lose oversight over more than 4,900 bank holding companies with roughly $3 trillion in assets, and about 870 state-chartered banks that are members of the Fed system and have a total of $1.7 trillion in assets.

The Fedâ€™s chairman, Ben S. Bernanke, and leaders of the Fedâ€™s 12 district banks have pressed Congress to let the Fed retain its say over smaller banks, and the fact that senators appear to be unwilling to go along is a reflection of the central bankâ€™s diminished prestige in the wake of the financial crisis.

The bill would also create a council to detect systemic risks to the financial system, and trigger, if necessary, a process to seize and dismantle a large financial firm on the verge of failure; the goal would be to limit the possibility of a broader meltdown and the need for a government bailout.

The risk council would be headed by the treasury secretary and include representatives of the Fed, the new consumer agency, the F.D.I.C., the Securities and Exchange Commission, the Commodity Futures Trading Commission and the Federal Housing Finance Agency â€” along with an official appointed to monitor the insurance industry, which is largely regulated by the states.

The bill would also impose comprehensive regulation of the sprawling market in over-the-counter derivatives. Standardized swaps and derivatives would have to be traded on exchanges or clearinghouses.

But companies that do not primarily deal in derivatives and are not major participants in the swaps market would be exempt from the new requirements. The size and extent of that exemption has been a key focus of behind-the-scenes negotiations over the past several months.

A key Republican objection to the consumer agency is that a new body of regulators empowered to write and enforce consumer protection rules could interfere with existing regulators tasked with ensuring the â€œsafety and soundnessâ€ of banks.

To address that objection, Mr. Dodd would allow the consumer agencyâ€™s rules to be overturned by a two-thirds vote of the new systemic risk council, or 6 of the 8 members, the people briefed on the matter said. In addition, the consumer agency would have enforcement powers over only those banks with more than $10 billion in assets. It would potentially have the ability to issue sanctions against nonbank financial companies, like payday lenders, debt collectors and mortgage originators and servicers, but which sectors and industries would be covered was not clear.

While the bill addresses many of the priorities the Obama administration outlined last July, and which the House acted on in a financial regulatory overhaul adopted in December, the bill does not go as far as the White House would like in reining in the size and scope of banks.

In January, Mr. Obama put forward a proposal he called the Volcker Rule, named for Paul A. Volcker, the former Federal Reserve chairman, which would prohibit deposit-taking banks from investing in or owning hedge funds or private equity funds, and from making market bets with their own money, as opposed to their customersâ€™ money, a practice known as proprietary trading. Senators from both parties have said that the Volcker Rule arrived late, and have been wary of adding to a bill that is already of immense length and complexity. Like the House bill, the Dodd proposal would empower regulators to crack down on excessively risky practices, but not ban proprietary trading outright.

It appeared that Mr. Dodd was focused on advancing a proposal that could advance through the Banking Committee with united support among its Democratic members, and hoped to have a committee vote on the bill before Congress recesses on March 26.