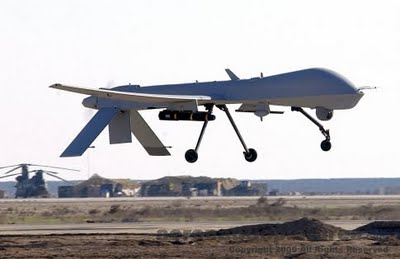 AUSTIN – The suspect’s house, just west of this city, sat on a hilltop at the end of a steep, exposed driveway. Agents with the Texas Department of Public Safety believed the man inside had a large stash of drugs and a cache of weapons, including high-caliber rifles.

As dawn broke, a SWAT team waiting to execute a search warrant wanted a last-minute aerial sweep of the property, in part to check for unseen dangers. But there was a problem: The department’s aircraft section feared that if it put up a helicopter, the suspect might try to shoot it down.

So the Texas agents did what no state or local law enforcement agency had done before in a high-risk operation: They launched a drone. A bird-size device called a Wasp floated hundreds of feet into the sky and instantly beamed live video to agents on the ground. The SWAT team stormed the house and arrested the suspect.

“The nice thing is it’s covert,” said Bill C. Nabors Jr., chief pilot with the Texas DPS, who in a recent interview described the 2009 operation for the first time publicly. “You don’t hear it, and unless you know what you’re looking for, you can’t see it.”

The drone technology that has revolutionized warfare in Iraq, Afghanistan and Pakistan is entering the national airspace: Unmanned aircraft are patrolling the border with Mexico, searching for missing persons over difficult terrain, flying into hurricanes to collect weather data, photographing traffic accident scenes and tracking the spread of forest fires.

But the operation outside Austin presaged what could prove to be one of the most far-reaching and potentially controversial uses of drones: as a new and relatively cheap surveillance tool in domestic law enforcement.

For now, the use of drones for high-risk operations is exceedingly rare. The Federal Aviation Administration – which controls the national airspace – requires the few police departments with drones to seek emergency authorization if they want to deploy one in an actual operation. Because of concerns about safety, it only occasionally grants permission.

But by 2013, the FAA expects to have formulated new rules that would allow police across the country to routinely fly lightweight, unarmed drones up to 400 feet above the ground – high enough for them to be largely invisible eyes in the sky.

Such technology could allow police to record the activities of the public below with high-resolution, infrared and thermal-imaging cameras.