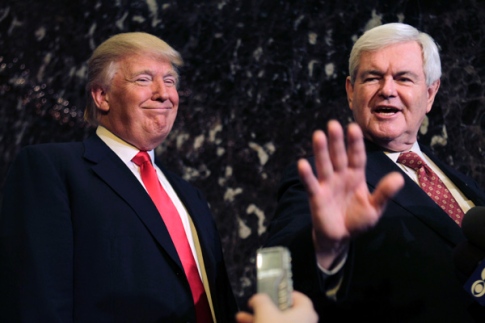 With the wheels coming off the GOP debate he is supposed to host, Donald Trump admitted Friday that heâ€™s looking into canceling the sparsely-attended forum.

But Trump, in a typical display of chutzpah, said thereâ€™s another reason why he might pull the plug – he still may run for President.

â€œIf the Republican, in my opinion, is not the right candidate [to defeat President Obama\],â€ Trump declared, â€œI am unwilling to give up my right to run as an independent candidate.â€

The Donald had blamed TV equal-time provisions that prohibited him from simultaneously running for President and hosting NBCâ€™s â€œThe Apprenticeâ€ until the showâ€™s May season finale for bowing out of the race.

He also claimed that several GOP candidates told him theyâ€™d only do the December 27 debate if Trump vowed to not launch a late bid for the White House once â€œThe Apprenticeâ€ was off the air.