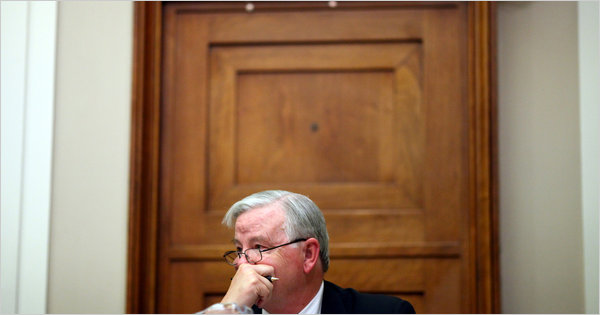 WASHINGTON â€” The outburst by Representative Joe L. Barton of Texas in support of BP underscored the potential peril for lawmakers forced to respond to crises involving industries vital to their regions, and whose bountiful donations finance their political campaigns.

Democrats continued to make use of Mr. Bartonâ€™s apology to BP, using it to portray Republicans as beholden to bigÂ oil. Mr. Barton, the senior Republican on the Energy and Commerce Committee, worked as a consultant to Atlantic Richfield Oil and Gas Company before being elected to Congress. He has long been one of the top beneficiaries of campaign donations from big energy companies, cornerstones of the Texas economy.

But in going after Republicans, the Democratsâ€™ attacks gloss over a more complicated picture.

The largest beneficiary of campaign donations from BP in the 2008 election cycle, for instance, wasÂ President Obama, who took in $77,000 from company executives and its political action committee. This year, SenatorÂ Blanche Lincoln, Democrat of Arkansas and chairwoman of the Agriculture Committee, leads all candidates with $286,000 in donations from oil and gas companies.

And while Democrats have pounced on Mr. Barton for accusing Mr. Obama of conducting a â€œshakedownâ€ by demanding that BP set up a $20 billion fund for oil spill claims, a number of Democratic lawmakers â€” especially those from oil-producing Gulf states â€” have struggled to balance their criticism of BP with support for the industry.

Officials like SenatorÂ Mary L. Landrieu and Representative Charlie Melancon, both Democrats of Louisiana, have demanded accountability for BP and reparations for individuals and businesses who may face financial catastrophe. But they have also fought to lift the moratorium onÂ offshore drilling imposed by the Obama administration after the Deepwater Horizon rig explosion, saying it is crippling the local economy.

â€œFifty-seven days ago this country was using 20 million barrels of oil a day,â€ Ms. Landrieu said on the Senate floor this week, responding to a speech by Mr. Obama from the Oval Office. â€œToday, 57 days later, 11 lives lost, the rig at the bottom of the ocean, we are still using 20 million barrels a day. The president did not say to people last night to park their cars and walk to work.â€

Ms. Landrieu continued, â€œWe have to understand we have to continue to drill for oil and gas.â€

Both Ms. Landrieu and Mr. Melancon, who is running for a Senate seat, receive substantial donations from the oil and gas industry, which is hardly surprising given the industryâ€™s big presence in Louisiana. For her campaigns, Ms. Landrieu has taken in $751,000 since 1996, while Mr. Melancon has received $312,000 since 2004.