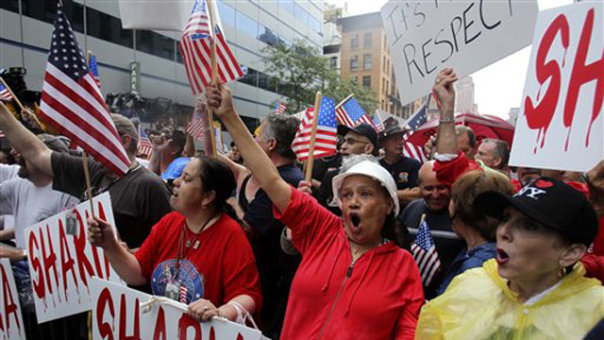 Islamic radicals are seizing on protests against a planned Islamic community center near Manhattan’s Ground Zero and anti-Muslim rhetoric elsewhere as a propaganda opportunity and are stepping up anti-U.S. chatter and threats on their websites.

One jihadist site vowed to conduct suicide bombings in Florida to avenge a threatened Koran burning, while others predicted an increase in terrorist recruits as a result of such actions.

“By Allah, the wars are heated and you Americans are the ones whoâ€¦enflamed it,” says one such posting. “By Allah you will be the first to taste its flames.”

White House homeland security adviser John Brennan told reporters Friday that he had seen no evidence that the debate over the proposed Islamic center in Lower Manhattan, other mosque protests or the planned Koran burning had affected U.S. counterterrorism efforts.

A White House official on Sunday stressed that Brennan was addressing the narrow question of whether the debates in the U.S. over Islam were having an impact on U.S. counterterrorism efforts, and that Brennan specifically declined to address whether those debates were energizing the jihadists.

A U.S. official on Sunday said the administration was taking the upswing in anti-U.S. chatter seriously. “Terrorists like Al Qaeda and its violent allies are motivated already to try to attack the United States, but when it comes to propaganda, extremists are pure opportunists. They’ll use whatever they can,” the official said.