Earmarks end for one year, but perk still potent on Hill 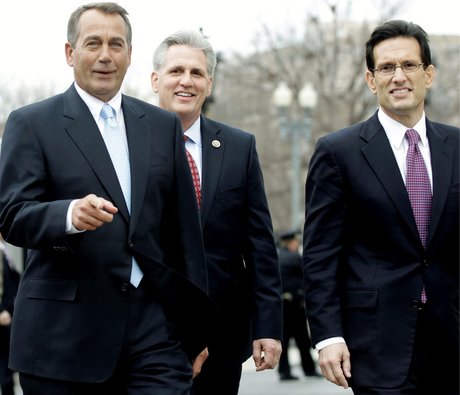 Capitol Hill insiders say at least 75 percent of lawmakers privately still think earmarking is a correct and proper use of congressional authority. Yet last week, one of theÂ Senateâ€˜s champion earmarkers,Â Sen. Daniel K. Inouye of Hawaii, hammered home the nail that officially ended the practice â€” at least for the time being.

The swift fall of a long-treasured congressional prerogative is a lesson for other movements in how a position held by a minority in Washington can become the dominant policy, resulting from the relentless efforts of a few congressional opponents combined with good luck, bad fiscal policy, some criminal behavior and a public armed with the Internet.

But the path from the heady days of political pork â€” just five years ago â€” to this yearâ€™s congressional ban that is backed up by a presidential veto pledge, also shows just how toxic spending has become and how savvy tea-party-inspired voters have gotten at understanding the intricacies of the federal budget.

Earmarks peaked in 2006. Citizens Against Government Waste says the marks at that time accounted for $29 billion, or slightly more than 1 percent of federal spending. By 2010, that figure had fallen to about one-half of 1 percent â€” significant money, though still low for the amount of attention it draws.

The fall of earmarks is a dramatic story of deepening deficits, criminal behavior by lawmakers and a growing list of bum projects that couldnâ€™t be ignored, starting with the infamous â€œbridge to nowhereâ€ in Alaska in 2005.

Not resting on their success, earmark opponents have their eye on undoing some of the damage they ascribe to past earmarks.