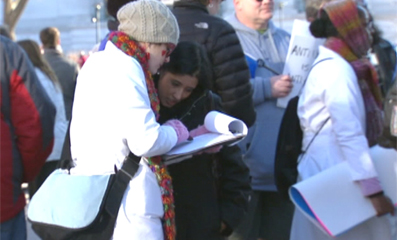 [Madison, WI] As tens of thousands of public employees skipped work this week to attend protest rallies outside the Wisconsin State Capitol, many wondered if they would face any disciplinary action for unexcused absences.

On Saturday, a group of men and women in lab coats purporting to be doctors were handing out medical excuse notes, without examining the â€˜patients.â€™

â€œI asked this doctor what he was doing and he told me they were handing out excuses to people who were feeling sick due to emotional, mental or financial distress,â€ said Christian Hartsock. â€œThey never performed an examâ€“he asked me how I was feeling today and I said Iâ€™m from California and Iâ€™m not used to the cold, so he handed me a note.â€

Another woman, who wished to remain anonymous, said they were handing out excuses like they were leaflets.

â€œI asked if they were handing out doctorsâ€™ excuses and a guy said yes and asked me if I needed one,â€ she said. â€œWhen I told them I needed one for February 16 and 17th, he wondered if I wanted to come back here for the protests next week.â€

â€œI said, â€˜sure,â€™ and I received a doctorâ€™s note for the 16th through the 25th of February, without a medical exam.â€