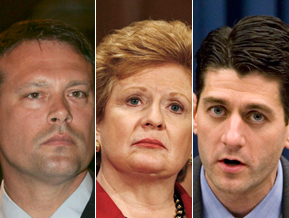 I voted for you,â€ the caller said in a voice mail to Democratic Rep. Heath Shulerâ€™s district office. â€œIf you vote for that stimulus package, Iâ€™m gonna kill you. Simple as that.â€

The FBI says the caller was a 70-year-old resident of Shulerâ€™s North Carolina district with a history of mental illness and a cache of guns. In the weeks before calling Shulerâ€™s office, the FBI says, the caller beat and choked his wife. She told the FBI that sheâ€™d tried to clear her home of guns â€” and that she went to bed at night with a can of mace tucked under her pillow.

When agents showed up at the manâ€™s door, they asked him why heâ€™d threatened to kill Shuler.

â€œI was trying to work the political scene,â€ he said.

The threat against Shuler is one of several detailed in 2009 FBI documents provided to POLITICO pursuant to a Freedom of Information Act request.

Sen. Debbie Stabenow (D-Mich.) and Rep. Paul Ryan (R-Wis.) were threatened with assassination. Sen. John Cornyn (R-Texas) and Rep. Ciro Rodriguez (D-Texas) were threatened with bodily harm. Someone told Sen. Blanche Lincoln (D-Ark.) that her throat would be cut. Rep. Zoe Lofgren (D-Calif.) was told someone would physically â€œfâ€”- her upâ€ if she held a town hall meeting in her district, according to the FBI files.