Fed stands pat but says will act if needed 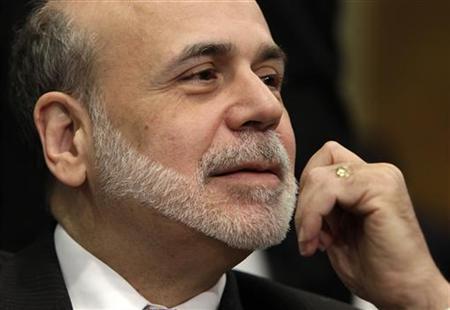 (Reuters) – Federal Reserve Chairman Ben Bernanke on Wednesday said U.S. monetary policy was “more or less in the right place” even though the central bank would not hesitate to launch another round of bond purchases if the economy were to weaken.

In a statement after a two-day meeting, the Fed’s policy-setting panel reiterated its expectation that interest rates would not rise until late 2014 at the earliest, and it took no action on monetary policy.

The Fed also adjusted its economic forecasts to acknowledge an improving labor market and slightly higher inflation over the next few years. The revised forecast, along with a change of heart by the most dovish Fed officials on the timing of the first rate rise, suggested the central bank has grown somewhat less inclined to take more action to help the economic recovery.

“We remain entirely prepared to take additional balance sheet actions as necessary to achieve our objectives,” Bernanke told reporters. “Those tools remained very much on the table and we would not hesitate to use them should the economy require that additional support.”

But he added: “For the time being, it appears that we are more or less in the right place.

In response to the deepest recession in generations, the Fed cut overnight rates to near zero in December 2008 and more than tripled its balance sheet by purchasing $2.3 trillion in government and mortgage bonds in two rounds of so-called quantitative easing.

Bernanke said the central bank could be spurred into doing more if the U.S. unemployment rate, which stood at 8.2 percent last month, failed to keep moving lower.

Fresh projections released by the central bank showed the most dovish officials no longer want to put off a rate increase until 2016. The Fed said seven officials believe it would be appropriate to raise borrowing costs in 2014, up from five officials in January, while only four wanted to wait longer, down from six.