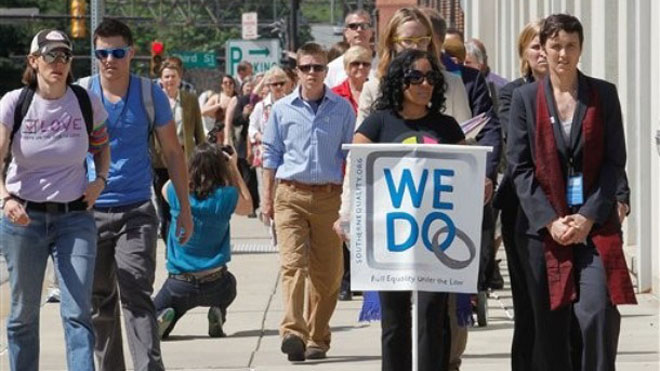 A federal appeals court ruled Thursday against a central provision of the Defense of Marriage Act, a groundbreaking decision that tees up a potential battle before the Supreme Court.

The three-judge panel of the 1st U.S. Circuit Court of Appeals in Boston ruled that the provision defining marriage as between a man and woman is unconstitutional in that it denies gay couples the rights granted to heterosexual couples.

The unanimous decision once again brings the issue of gay marriage to the fore of the nation’s political debate. It comes just a few weeks after President Obama announced his support for gay marriage — in the wake of that announcement, some gay advocacy groups have stepped up pressure on Washington to fight DOMA.

Considering the potential Supreme Court battle ahead, White House Press Secretary Jay Carney was asked Thursday whether the Obama administration would actively fight for overturning the law, which was originally signed by Democratic President Bill Clinton.

Carney noted that the Obama administration has concluded the section in question is unconstitutional and will no longer defend it in court. Without commenting on what steps the administration might take in the future, he described the Justice Department as an “active participant” in the case.

“There’s no question that this is in concert with the president’s views,” he said. “I can’t predict what the next steps will be in handling cases of this nature.”