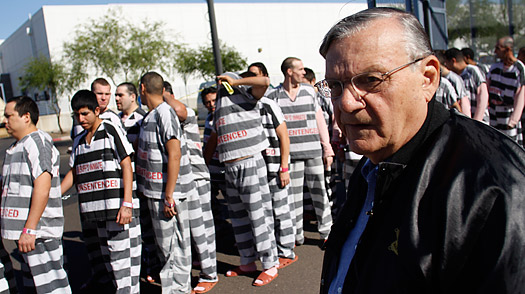 The federal government has closed a criminal probe of alleged financial misconduct by Arizona lawman Joe Arpaio, who styles himself as “America’s toughest sheriff,” and no charges will be filed, the U.S. Attorney’s Office said on Friday.

A separate federal investigation relating to allegations of civil rights abuses by Arpaio’s office is continuing.

The announcement on Friday marked the end of an investigation that began in November 2010 at the behest of the Maricopa County Board of Supervisors to examine alleged financial improprieties by the county sheriff and his deputies.

A federal criminal inquiry into several of those matters was concluded last summer with the U.S. Attorney’s Office in Arizona declining to initiate criminal charges.

Maricopa County authorities were informed on Friday that federal prosecutors had likewise declined to bring charges in connection with allegations that the sheriff’s office had misused county credit cards or misspent money from jail facilities excise taxes.

In addition, the U.S. Attorney’s Office declined to prosecute two former officials of the county attorney’s office who were accused of wrongfully prosecuting a local judge.

Assistant U.S. Attorney Ann Birmingham Scheel said in a statement that her office “is closing its investigation into allegations of criminal conduct by current and former members of the Maricopa County Sheriff’s Office and the Maricopa County Attorney’s Office.”