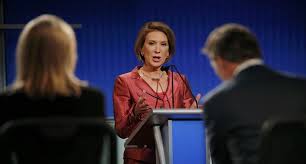 Claiming a spike in fundraising since Thursday night’s debate, Carly Fiorina threw a punch at Donald Trump while also making an appeal to voters currently inclined to support him. “We certainly have seen an uptick in financial support.

We’ve seen an uptick in support generally and so, it’s very exciting,” Fiorina told Chris Wallace on Fox News Sunday. “We’re going to talk to as many people as we can through every medium there is. I will continue to do what I’ve done from day one. I will answer any question. I will talk to anyone. I’m not afraid to talk about anything.The more people get to know me, the more people support me. So, that’s what we’re going to keep doing.”

NBC conducted an online survey that suggests Fiorina and Senator Ted Cruz (R., Texas) were the two candidates who gained the most support from their debate performances, although Trump still led the field. “Twenty-two percent said Fiorina won or had the best performance in the debate, followed by 18 percent who said Trump had the best performance,” per MSNBC. “However, another 29 percent said Trump did the worst in the debate, clearly showing how polarizing he is. When the candidates’ negative performance percentages are subtracted from their positive percentages, Fiorina notched a positive 20, whereas Trump scored a negative 11.”