First Lady says husband ‘a man we can trust’ 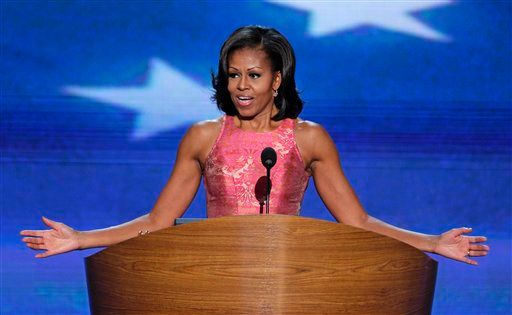 HARLOTTE, N.C. (AP) â€” First ladyÂ Michelle ObamaÂ lovingly praised her husband Tuesday night in a prime-time Democratic Convention speech as a devoted husband and caring father at home and a “man we can trust” to revive the nation’s weak economy as president, beckoning the country to return him toÂ the White Housedespite agonizingly slow recovery from recession.

“He reminds me that we are playing a long game here … and that change is hard, and change is slow and it never happens all at once,” she told a nation impatient with slow economic progress and persistently high unemployment of 8.3 percent. “But eventually, we get there, we always do,” she said in aÂ speechÂ that blended scenes from 23 years of marriages with the Obamas’ time in the White House.

Mrs. Obama, given a huge ovation and describing herself as the “mom in chief,” made no mention ofÂ Republican challenger Mitt Romney. But those who preceded her to the podium on the first night of the president’s convention were scathing.

“If Mitt were president, he’d fire the reindeer and outsource the elves,” declared formerÂ Ohio Gov. Ted StricklandÂ in one biting speech.

Tapped to deliver the keynote address, San Antonio Mayor Julian Castro said Romney was a millionaire politician who “quite simply, doesn’t get it” when it comes to the needs of the middle class. Referring to the Republican’s support for mandatory health insurance when he was governor of Massachusetts, he added, “Gov. Romney has undergone an extreme makeover, and it ain’t pretty.”