Five paths to victory for Trump 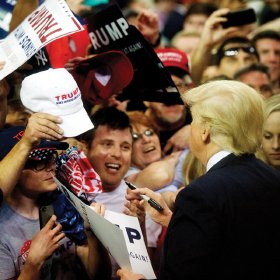 One of the most pervasive myths in American politics is that a “Big Blue Wall” will protect Democratic presidential nominees, perhaps even those who lose the popular vote. In truth, this electoral Blue Wall is more like a collection of disconnected forts—some imposing, some not—and the loss of any one of them would likely doom the Democratic nominee.

The Blue Wall—states where the Democrats have won every presidential race since 1992—includes the entire Northeast except for New Hampshire, the Midwestern Great Lakes states aside from Ohio and Indiana, the three Pacific Coast states, and Hawaii. Even holding the wall is no guarantee of victory. John Kerry won the entire Blue Wall in 2004, plus New Hampshire, yet still lost to George W. Bush by 35 electoral votes. Al Gore won the entire Blue Wall in 2000—back when it was worth 13 more electoral votes—plus Iowa and New Mexico, yet still lost to Bush by 5 electoral votes. For the Democrats, holding the Blue Wall is necessary but not sufficient.

It is often claimed that Donald Trump has several must-win states, and this is true (although the states listed are often wrong). In addition to the 23 states that Mitt Romney won by at least 7 percentage points, which Trump isn’t going to lose, Trump has 3 must-win states: Ohio, Florida, and North Carolina. (Polling finds that Trump narrowly overtook Clinton in mid-September in all three.) If Hillary Clinton wins any of those states, it’ll be a knockout blow.

But in addition to the 15 states where President Obama beat Romney by at least 10 points, which Clinton isn’t going to lose, Clinton has 5 must-win states: Pennsylvania, Michigan, Wisconsin, Minnesota, and Virginia. (Polling finds her ahead in all five.) The first four are part of the Blue Wall; the Old Dominion is not. If Trump wins any of those states, he’ll be headed to the White House.

So there are eight potential knockout states in this election, and five of them are being defended by Hillary Clinton.