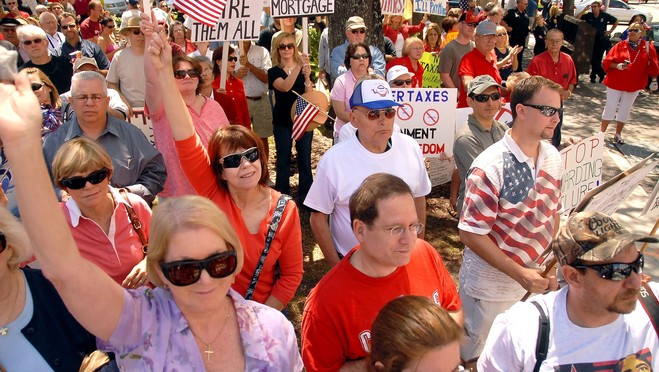 Florida has a Tea Party and a tea party movement, and no, they are not the same thing.

As tens of thousands of angry conservative voters began protesting big government and federal spending, Fred O’Neal decided to tap into that energy and create a state-recognized political party – the Tea Party. The party now has a candidate on the 2010 ballot to challenge Democratic U.S. Rep. Alan Grayson.

But many tea party activists don’t agree with the strategy. They want to be a force of change that backs candidates who share their beliefs – not a third party that could split votes and benefit Democratic candidates.

“There’s been a steady campaign to try to drive a wedge between the Tea Party and the other people in the tea party movement,” O’Neal acknowledged. “They’re trying to basically discredit what we’re doing.”

While O’Neal is hearing from some local groups interested in connecting with the party, he’s also facing a lawsuit filed by other leaders who don’t want him to have the rights to the name.

“The tea party movement at some level was supposed to transcend parties, not turn into one,” said Willie Lawson, who runs a Tampa-area conservative Internet radio talk show. “They’re really fashioning their whole paradigm after something that doesn’t work. That seems insane to me.”

Rather than form a party, many just want to push the Republican Party further to the right, which they say returns it to the principles it became know for during President Ronald Reagan’s administration. Trying to field candidates is a mistake, they say.

“The one thing that people talk about over and over again is Ross Perot. Ross Perot is the only reason that Bill Clinton became president,” said Michael Caputo, a political consultant who is helping movement leaders challenge O’Neal. He was referring to the 1992 election when Reform Party candidate Perot syphoned off votes from President George H.W. Bush, allowing Clinton to win with less than 50 percent of the vote.

While there’s a split over how to cause change, the goals are essentially the same – to steer political leaders, and particularly the Republican Party, back to fiscally conservative principles.

“We’d love to be out of business. We’d love for Republican candidates and the Republican Party to re-embrace Reaganomics and the positions and the philosophies that Reagan had,” O’Neal said. “It’s strayed.”

O’Neal is encouraging Republicans to stay registered with the GOP so they can support conservative candidates in the August primary. For example, he backs former House Speaker Marco Rubio in his Senate campaign against Gov. Charlie Crist.

So far only 116 voters have registered with the Tea Party. Its organization consists of O’Neal and a handful of volunteers and its headquarters is in a small, sparsely furnished office 15 stories above downtown Orlando. Wall art includes a print of George Washington and scenes from the Revolutionary War and a Tea Party banner.

Money is tight – the party raised about $20,000 the first three months of this year. The focus during this election cycle is supporting candidates like Peg Dunmire, a financial adviser and former hospital administrator who is convinced she can top both Grayson, the Democratic congressman, and the eventual Republican nominee.

Alan Grayson Will Not Face Charges in Marital Spat