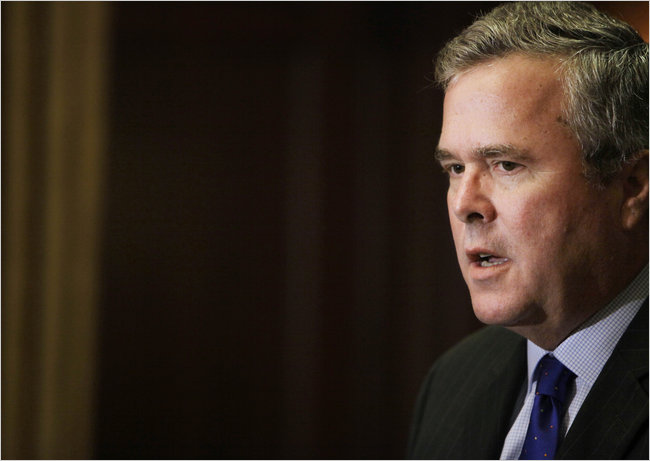 â€œItâ€™s kind of like a kid coming to school saying, â€˜The dog ate my homework,â€™Â â€ Mr. Bush, this stateâ€™s former governor, said over lunch last week at the Biltmore Hotel. â€œItâ€™s childish. This is what children do until they mature. They donâ€™t accept responsibility.â€

In fact, instead of constantly bashing the 43rd president, Mr. Bush offered, perhaps Mr. Obama could learn something from him, especially when it comes to ignoring the Washington chatter. â€œThis would break his heart, to get advice that applies some of the lessons of leadership my brother learned, because he apparently likes to act like heâ€™s still campaigning, and he likes to blame Georgeâ€™s administration for everything,â€ Mr. Bush said, dangling a ketchup-soaked French fry. â€œBut he really seems like heâ€™s getting caught up in what people are writing about him.â€

At 57,Â Jeb Bush remains an intriguing figure inside his fractious party. At a moment when Republicans are groping for an agenda beyond opposition, Mr. Bush has long been considered one of the partyâ€™s true idea guys, someone a lot of party insiders think could still be a serious presidential contender.

But Mr. Bush, the son and brother of presidents, occupies just as intriguing a place within his own family. American presidents have traditionally felt themselves duty-bound not to criticize their successors (no matter what their successors may say about them), which means that Jeb is the only Bush in public life who can defend the family name.

â€œGeorge isnâ€™t going to break that,â€ Mr. Bush said, meaning the ex-presidentsâ€™ code, â€œand if he was asked to serve in some way, he would do it, in spite of all the â€˜itâ€™s Bushâ€™s fault.â€™ Thatâ€™s just the kind of guy he is.â€