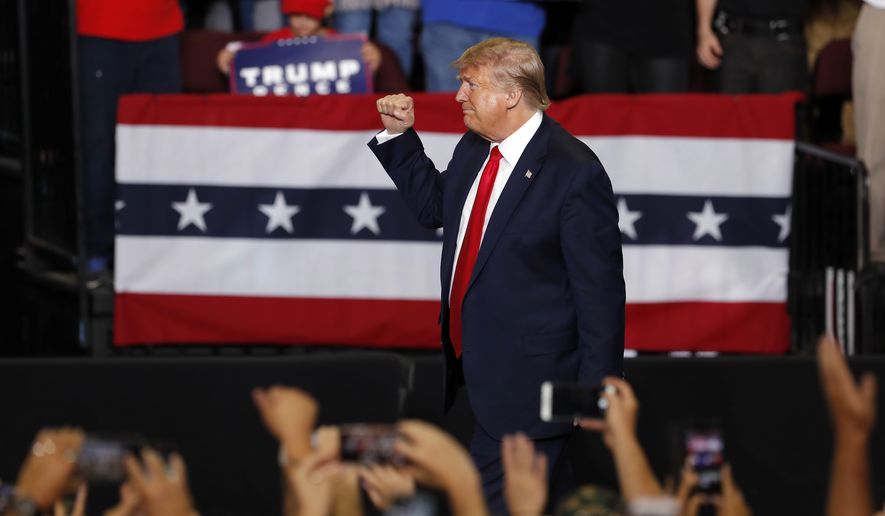 In each of the three states, majorities disapprove of the job Trump is doing as president, pluralities say coronavirus is “not at all” under control, and Biden is the preferred choice when it comes to handling the virus. Plus, he’s favored over Trump to nominate the next U.S. Supreme Court justice.

There are few undecided voters, and Biden’s support is 50 percent or better in each state. His advantage over Trump is outside the margin of error in Nevada and Pennsylvania, but not Ohio.

Across the states, Biden’s edge comes mainly from women, nonwhites, voters under age 35, and those ages 65 and over. When it comes to handling coronavirus in particular, more seniors trust Biden to do a better job than Trump — in larger numbers than back his candidacy overall.

About 9 in 10 of both Biden and Trump supporters in each state are extremely or very interested in the election.

All interviews were completed after the September 18 death of Justice Ruth Bader Ginsburg.

Here are the results by state:

Hispanic likely voters favor Biden in the presidential race — and that helps give him a 52-41 percent lead over Trump in Nevada.

Biden leads by 8 points among seniors, 15 points among women, and 36 points among voters under age 35. Hispanics favor him by 28 points (61-33 percent). That is similar to the 31-point advantage Hillary Clinton received among Nevada Hispanic voters in 2016.

Nevada voters trust Biden to do a better job than Trump on coronavirus by 15 points, nominating the next Supreme Court justice by 10, and policing and criminal justice by 8.

On handling the economy, more give the nod to Trump by a slim 3-point margin.

The largest number of Nevada voters, 42 percent, think coronavirus is “not at all” under control, and almost all of them back Biden. Majorities of those saying it is completely/mostly or somewhat under control support Trump.

Trump lost Nevada in 2016 by less than 3 points, receiving about 46 percent of the vote. Today, that same number, 46 percent, approve of his job performance, while 53 percent disapprove.

Here’s why it’s tight. Men back the president by 4 points, while women go for Biden by 14. White voters without a college degree pick Trump by 18 points, while Whites with a degree back Biden by 7. And Trump is the choice among rural voters by 17 points, while suburbanites like Biden by 10.

Ohio voters think Biden is better on coronavirus (+14 points) and nominating the next Supreme Court justice (+6). They think Trump is better on the economy (+5), while the two are closely matched on policing and criminal justice (Biden +2).

Half of Ohioans (51 percent) say they are holding steady financially, while the rest split between falling behind (27 percent) and getting ahead (21 percent).

That leads to mixed marks for the president’s job performance: 47 percent approve, while 51 percent disapprove.

In 2016, Trump narrowly won Pennsylvania (by less than one percentage point). It was the first time since 1988 that a Republican presidential candidate had won the state. Eight percent of those who backed him in 2016 are Biden supporters today.

“Trump’s surprise 2016 win in Pennsylvania was driven by his mobilization of voters in the northern and central regions of the state,” says Republican pollster Daron Shaw, who conducts the Fox News survey with Democrat Chris Anderson. “He needs that kind of support again and a slight tick up among suburban voters to pull even here.”

More voters trust Biden over Trump to handle coronavirus (by 17 points) and nominating the next Supreme Court justice (+9). Views divide more closely on policing and criminal justice (Biden +6) and the economy (Trump +4).

On nominating the next justice, women prefer Biden by 20 points, while men favor Trump by 3. In addition, more Democrats stay loyal to their candidate (93 percent Biden) than Republicans do to theirs (84 percent Trump).

A majority of 52 percent are holding steady financially. Another 20 percent report they are getting ahead, while 26 percent feel they are falling behind.

Over half of those planning to cast their ballot in person favor Trump in Nevada (53 percent), Ohio (59 percent), and Pennsylvania (62 percent).

Majorities of those voting by mail support Biden: 71 percent in Nevada, 67 percent in Ohio, and 79 percent in Pennsylvania.

Conducted September 20-23, 2020 under the joint direction of Beacon Research (D) and Shaw & Company (R), these Fox News surveys include interviews with 810 Nevada likely voters, 830 Ohio likely voters, and 856 Pennsylvania likely voters randomly selected from statewide voter files, who spoke with live interviewers on landlines and cellphones. In each state, the margin of sampling error is plus or minus 3 percentage points for the total sample of likely voters. Nevada respondents could complete the interview in English or Spanish.