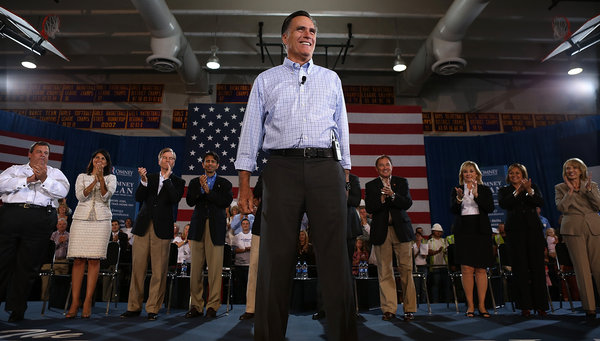 BASALT, Colo. â€” After a rocky trip to Europe and Israel in which his remarks drew complaints from British andÂ PalestinianÂ leaders,Â Mitt RomneyÂ flew Thursday to Colorado, an important swing state, to try to regain his footing and refocus his campaign on his core message of renewing the economy.

It was a day to rally the Republican troops around him. At a high school auditorium here, near Aspen, he was backed by 10 Republican governors, including one vanquished rival â€”Â Rick PerryÂ of Texas â€” and several politicians who have been subject of vice-presidential speculation, including Govs.Â Bobby JindalÂ of Louisiana,Â Chris ChristieÂ of New Jersey andÂ Nikki R. HaleyÂ of South Carolina.

Mr. Perry, who endorsed Newt Gingrich when he dropped out of the nominating fight in January, said to Mr. Romney that â€œIâ€™m proud to stand with you on this stage,â€ and told the crowd of a few hundred that Coloradoâ€™s energy industry would get a much better shake from Mr. Romney.

Mr. Romney struck back at Harry Reid, the Senate majority leader, who has suggested that Mr. Romney spent a decade not paying taxes.

â€œItâ€™s time for Harry to put up or shut up,â€ he told Sean Hannity of Fox News. â€œItâ€™s untrue, dishonest and inaccurate,â€ he said, demanding that â€œHarry reveal his sources.â€

Mr. Romney, who shied away from directly criticizingÂ President ObamaÂ while overseas, wasted no time in assailing the president back on their home turf, saying Mr. Obama had had plenty of time to get the countryâ€™s economy back on track. And he later pledged that he would balance the budget by the last year of his second term, though he did not elaborate on how he would do that, given that his proposed tax cuts would,Â according to studies, increase the deficit.

On the most politically critical of those issues â€” jobs â€” Mr. Romney prefers to focus on job losses under Mr. Obama beginning in January 2009, the month the president was inaugurated. By that measure, the country lost about a half-million jobs through June of this year.

But Mr. Obama and his aides say it is more fair to start in March 2010, after Mr. Obamaâ€™s signature stimulus law had been passed and new White House policies began to take effect. By that measure, the economy had added more than four million private-sector jobs by June of this year.

Other Republican governors who spoke on behalf of Mr. Romney here were Bob McDonnell of Virginia, Matt Mead of Wyoming, Gary R. Herbert of Utah, Mary Fallin of Oklahoma, Susana Martinez of New Mexico and Jan Brewer of Arizona.