Gingrich says GOP should back Todd Akin in Missouri 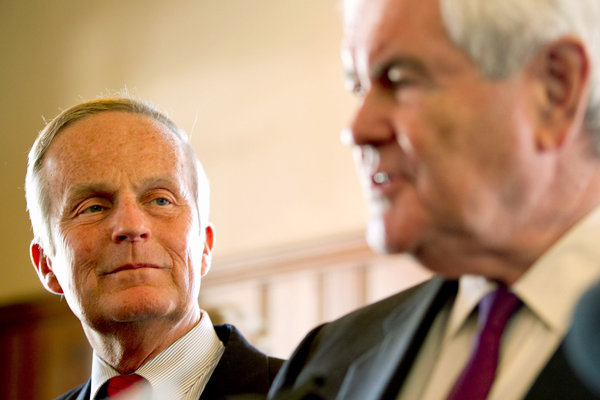 Campaigning with Akin, the Republican challenger to Democratic Sen.Â Claire McCaskill, Gingrich said that Republican unity â€“ and the chance to control the Senate â€“ needed to take priority over any discomfort over Akinâ€™s remark last month about â€œlegitimate rape.â€

The Republican National Committee “has a moral obligation to run a single victory ticket in the state” and support Akin, Gingrich said. He headlined a $500-a-plate lunchtime fundraiser for the conservative lawmaker at an Italian bistro that drew about 40 guests and pink-clad protesters backingPlanned Parenthood.

Republican leaders, includingÂ Mitt Romney, the partyâ€™s presidential nominee, tried unsuccessfully to get Akin to step aside after his Â comment that women who were victims of â€œlegitimate rapeâ€ would be unlikely to get pregnant because women’s bodies have a way of shutting down to prevent conception.

The Republican congressman repeatedly has declined to quit the race and has apologized for the comment, saying he “misspoke,” though he also campaigned on the support he received from those who shared his view. He is staunchly opposed to abortion, including in cases of rape. The deadline for him to petition a court for permission to withdraw from the ballot is Tuesday, and he said he was sticking with his decision not to quit.

“For about the 100th time, I am in the race,” Akin said Monday, as he appeared with Gingrich at a historic train station in downtown Kirkwood, a St. Louis suburb.

Having Gingrich accompany him for the day has given some momentum to Akinâ€™s campaign after other Republicans here and in Washington have shunned him and withdrawn financial support.

Gingrich said such sentiment was understandable in the immediate aftermath of Akin’s comments.