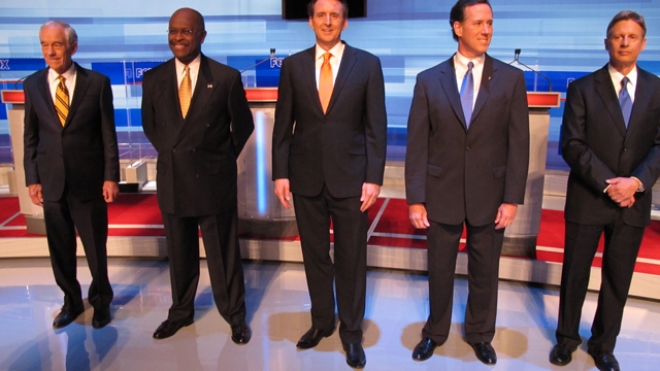 “I tip my cap to him in that moment,” he said. “But that moment is not the sum total of America’s foreign policy. He’s made a number of other decisions relating to our security here and around the world that I don’t agree with.”

Pawlenty cited Libya as one example, saying he didn’t agree with Obama’s decision to defer to the United Nations on how to deal with Muammar Qaddafi’s violent crackdown on rebels.

“If he says Qaddafi must go, he needs to maintain the option to make Qaddafi go and he didn’t do that,” he said.

“The decision he made with Usama bin Laden was a tactical decision,” he said. “It wasn’t a strategic decision.The strategic decision was made by President Bush to go after him. What President Obama has done on his watch, the issues that have come up while he’s been president, he’s gotten it wrong strategically every single time.”

Pawlenty and Santorum were among the five participants seeking to prove themselves to be more than the party’s B-team as they try to catapult theirÂ White House bids into the national spotlight.

They are the only candidates who met the sponsors’ criteria to participate: forming a presidential exploratory committee, filing state GOP paperwork and paying $25,000 to get on the state primary ballot.

They missed out on a chance to weigh in on the biggest issues of the day, including whether to release a photo of bin Laden’s corpse, something that Obama has said he won’t do. But four of the five participants said they would release the photo. Cain was the only one who opposed it.

At one point, Johnson, a libertarian-leaning Republican who backs gay rights and legalizing some drugs, cried foul over not getting as many questions as his fellow debaters. Fox News’ anchor Bret Baier said the moderators would be “fair and balanced” with the questions.

Cain, a former Federal Reserve banker and CEO of Godfather’s Pizza, was the first to set foot on stage. Later came Pawlenty, who zinged those rivals who chose to skip the debate.

“One of the things aboutÂ leadership is that you’ve got to show up,” he said. “And if you want to be president of theÂ United States you’ve got to make a case to the American people thatÂ Barack Obama needs to be dismissed from his position.”
To read more:Â http://www.foxnews.com/politics/2011/05/05/gop-contenders-look-seize-moment-presidential-debate/#ixzz1LX9gHhOU