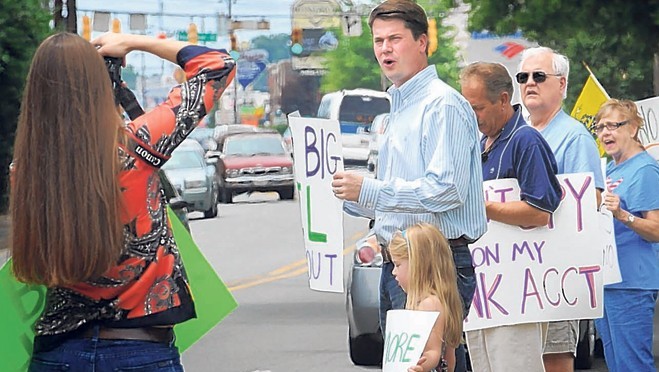 A man slugged Nathan Tabor, the chairman of the Forsyth County Republican Party, in the face during a protest Tuesday in Greensboro. You can hear the smack on the video and watch the man’s fist make contact with Tabor’s face.

And lots of people have. That punch is now working its way around the blogosphere, where Tabor said conservatives are calling the incident a case of liberal intolerance.

“I’ve had 5,000-plus e-mails today that I have seen,” Tabor said yesterday. “I’ve been on the phone since 6:50 a.m. this morning. I’ve done 17 or 18 radio programs. I’ve done 20 short five-minute blogger-columnist written interviews.”

Tabor is onÂ YouTube.com and has been on Fox news nationally and on local television.

He said that he’s received “100 percent support” from people who have contacted him.

The encounter between Tabor and Govenor Vance Spencer, a Greensboro man, took place in front of the office of Rep. Mel Watt, D-12th, in Greensboro. Tabor was among Republicans, tea party members and others protesting government bailouts. Spencer walked up and argued briefly with the protesters. He was walking away when he encountered Tabor on the sidewalk.

Spencer’s version is that Tabor “had his camera in my face,” and that he backed into Tabor’s wife as he was getting off the sidewalk. Spencer said that as he was trying to move to the side, Tabor shoved him in the neck. Spencer said he hit Tabor to protect himself because he thought his life was in danger.

Both Spencer and Tabor are charged with simple assault. Spencer is also charged with communicating threats. Both have court dates on July 7 in Guilford County.

There are two videos of the incident: One shot by Tabor during the encounter, and another shot by another person taking part in the protest. Portions of both are posted onÂ JournalNow.com.

Here’s some background on the protest: Tabor said that he and about 25 like-minded conservatives were marching with signs in front of Watt’s office in hopes of persuading him to oppose the so-called Durbin amendment that is part of a financial reform bill in Congress. The amendment would regulate debit-card fees that businesses pay, but opponents say it is a “bailout” for big business.

Tabor was filming the protest from a distance, but moved to the sidewalk about the time Spencer started walking away. Tabor said he went over to Spencer because his 5-year-old daughter was sitting nearby.

The footage then cuts to Spencer’s face taking up most of the frame in the scene shot on the sidewalk. Tabor can be heard telling Spencer not to “touch my property again and don’t push me again.”