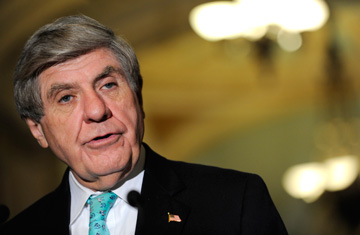 WhenÂ Sen. Joe ManchinÂ III, West Virginia Democrat, voted last week to block a Republican attempt to repeal the 2010 health care law, his action on some levels was routine. The vote was straight along party lines, and theÂ GOP effort was viewed largely as a symbolic gesture with little chance ofÂ success.

Within hours, however, the Republican public relations machine cranked into action, firing up press releases, videos and a website that attacked the newly minted senator for his vote and support of â€œthe ObamaÂ agenda.â€

â€œDespite his many campaign promises as he soughtÂ West Virginia’s Senate seat,Â Manchin has used his time in Washington to embrace President Obamaâ€™s liberal policies,â€Â Brian Walsh, a spokesman with theSenate Republicanâ€™s campaign arm, said in an e-mail to reporters the morning after Wednesdayâ€™s vote on repeal of the health careÂ law.

Although the next congressional elections are more than 18 months away, the vote served as the opening salvo of the 2012Â Senatecampaigns. Republicans vow to continue to hold Democrats accountable for their support of theÂ measure.

â€œThose were difficult votesâ€ for moderate Democrats, saidÂ Steve Lombardo, a Republican pollster and president of theÂ Lombardo Consulting Group. â€œThe [Democratic leaders in theÂ Senate] needed their votes, and they got them. But now theyâ€™ll pay some politicalÂ price.â€

Mr. Manchin, elected in November to fill the seat of the lateÂ Sen. Robert C. Byrd, a Democrat, isnâ€™t the only moderate Democrat up for re-election in 2012 who could face a Republican-induced backlash for support of the presidentâ€™s health care initiative. Other likely targets include Sens.Â Ben Nelson of Nebraska,Â Bill Nelson of Florida,Â Claire McCaskill of Missouri andÂ Jon Tester ofÂ Montana.

Ben Nelson, in particular, has been hammered by Republicans since his initial support of the measure in lateÂ 2009.

Mr. Nelson, like many other moderate Democrats, said he doesnâ€™t support scrapping the entire law but would consider tweaking or even repealing some of its provisions, including the â€œindividual mandateâ€ that will require most Americans to have health insurance or risk aÂ penalty.

Mr. Nelsonâ€˜s tactic could be enough to placate voters and keep them in office, especially if public concerns about the law fade over time, some political specialistsÂ say.