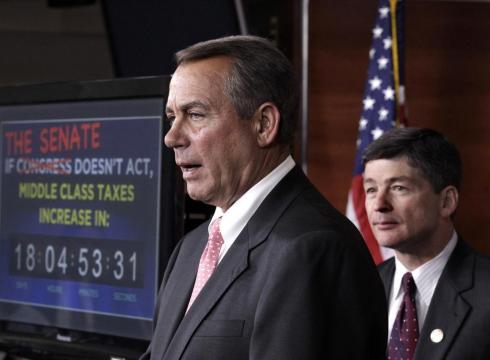 House Republicans voted Tuesday to give PresidentÂ ObamaÂ the payroll-tax-cut extension he desperately wants, but only if he accepts major changes to unemployment benefits and speeds up a decision on building theÂ Keystone XL pipeline, which the administration has sought to delay until after the 2012 election.

The 234-193 vote came just hours after theÂ White HouseÂ saidÂ Mr. ObamaÂ would veto the bill if it reached his desk, rejecting theÂ GOPâ€™s proposed spending cuts and instead insisting the bill include the tax increases on the wealthy that he has made the centerpiece of his re-election campaign.

Complicating matters, Republicans accusedÂ SenateÂ Democrats of holding a massive year-end spending bill hostage to the tax negotiations. With existing funding slated to run out on Friday, the stalemate risks yet another partial government shutdown – the third time this year lawmakers have pushed to the brink.

CongressÂ is racing against several deadlines in addition to spending. UnlessÂ CongressÂ acts, extended unemployment benefits run out at the end of this year, the 2-percentage-point payroll tax cut expires, and doctors would see a 27 percent cut in payments for treatingÂ Medicarepatients.

â€œThis is not a time for Washington Republicans to score political points against the president,â€Â White HouseÂ press secretaryÂ Jay CarneyÂ said after the House vote. â€œCongressÂ should not finish their business before finishing the business of the American people. They cannot go on vacation before agreeing to prevent a tax hike on 160 million Americans and extending unemployment insurance.â€

Overall, Republicans say theyâ€™ve tried to giveÂ Mr. ObamaÂ everything he wants: an extension of the payroll tax cut into next year, another round of unemployment benefits – albeit at lower levels than Democrats hoped – and another round of the so-called â€œdoc fixâ€ that waives the 1997 budget law that tried to control costs by imposing ever-decreasing payments to doctors who treatÂ MedicareÂ patients.

In exchange, theÂ GOPÂ said it wanted to force the administration to make a decision on the pipeline, which would carry oil derived from Canadaâ€™s tar sands into the U.S.