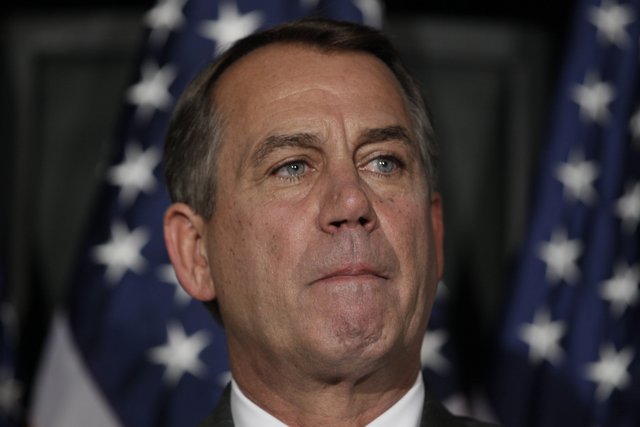 House Republicans are scrambling to rewrite their debt limit increase bill afterÂ Congressâ€™s official scorekeeper said it will save less thanÂ Mr. Boehner had claimed, leaving him in violation of his own pledge to cut more spending dollar-for-dollar than the debt would be increased.

â€œWeâ€™re here to change Washington â€“ no more smoke-and-mirrors, no more â€˜phantom cuts.â€™â€ saidÂ Michael Steel, a spokesman forÂ Mr. Boehner, Tuesday afternoon. â€œWe promised that we will cut spending more than we increase the debt limit â€“ with no tax hikes â€“ and we will keep that promise. As we speak, congressional staff are looking at options to re-write the legislation to meet our pledge.â€

CBO said thatÂ Mr. Boehnerâ€™s bill does reduce cut $1.1 trillion when compared to where spending levels were in January â€” but that was beforeÂ Congress and the president agreed to a 2011 spending bill that cut tens of billions of dollars.

CBO saidÂ Mr. Boehnerâ€™s office requested that additional calculation because his â€œstaff indicated that this comparison would be useful.â€

Compared to current levels,Â CBO said the debt bill reduces future discretionary spending by $695 billion and reduces mandatory spending by $20 billion over 10 years. Those savings mean the government would pay $135 billion less in projected interest costs, which is howÂ CBOreached the $850 billion total.