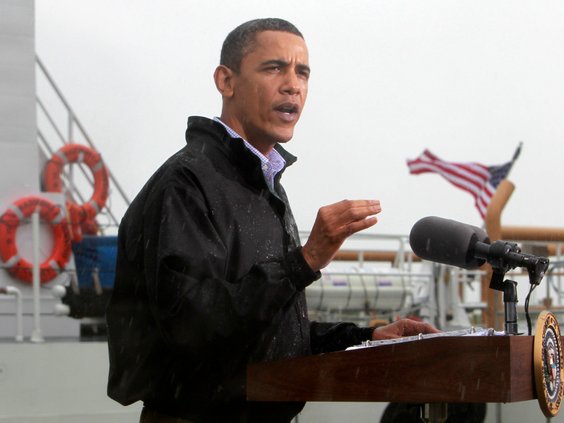 (Reuters) – BP Plc said on Monday it will again attempt to contain oil gushing deep in the Gulf of Mexico, this time with a far smaller funnel than it tried before, as a massive slick threatened Louisiana shores.

With cleanup efforts in high gear, a blame game will unfold in Washington on Tuesday as executives from BP and two other companies involved, Transocean Ltd and Halliburton Co, appear before Senate panels probing the disaster.

BP now aims to deploy a small “top hat” dome over the leak after its effort over the weekend to cover it with a huge metal box was stymied by a buildup of crystallized gas hydrates.

Fears of a prolonged environmental and economic disaster for the Gulf Coast are growing after the setback for BP, which contracted the Deepwater Horizon drilling rig that exploded on April 20, killing 11 people and triggering the spill.

The new plan is to have an oil-barrel-sized container at the leak site, a mile down from the water’s surface, within 72 hours, BP Chief Executive Tony Hayward said. Then oil would be siphoned up to a tanker.

“There will be less seawater in the smaller dome and therefore less likelihood of hydrate formation,” he told reporters at the company’s U.S. headquarters in Houston.

Hydrates, essentially slushy methane gas, clogged the top of the dome, preventing crude from being pumped.

The projected westward spread of the massive slick it is creating has raised fears for rich fishery areas filled with shrimps, oysters, crabs and crayfish, and even on major shipping channels off the Louisiana coast.

The company is also spraying chemical dispersants at the ruptured well, an operation Hayward said was showing some success. The well is spewing an estimated 5,000 barrels (210,000 gallons/795,000 liters) of oil a day into the Gulf.

Other options BP is weighing to stem the flow of oil include trying to block the well’s failed blowout preventer with a “junk shot” of rubber or other materials, or fitting a new valve or preventer. It is also drilling a relief well, but that could still take 75 to 80 days to complete.