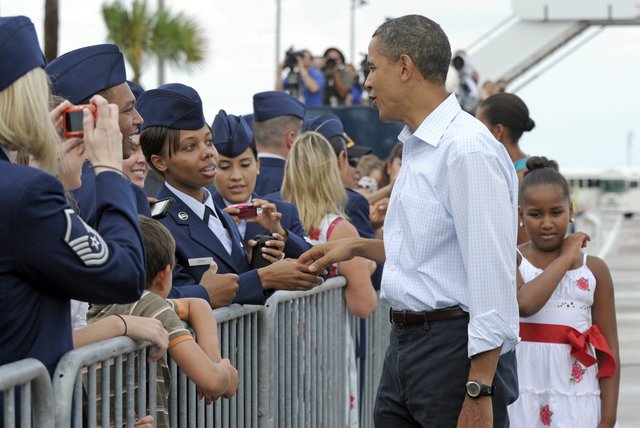 PANAMAÂ CITYÂ BEACH, Fla. (AP) â€” President Barack Obama declared Gulf Coast beaches clean, safe and open for business Saturday as he brought his family to the Florida Panhandle and promised residents that the government wouldn’t forget them once efforts to stop the leak are finished.

On a warm and muggy day, Obama pledged to “keep up our efforts until the environment is cleaned, polluters are held accountable, businesses and communities are made whole, and the people of the Gulf Coast are back on their feet.”

Obama is in the region for a brief weekend trip with first lady Michelle Obama, daughter Sasha (her sister Malia is at summer camp) and the family dog, Bo. Their 27-hour stop in the Sunshine State is as much a family vacation as it is an attempt by the president to convince Americans that this region, so dependent on tourism revenue, is safe for travel â€” and that its surf is clean.

To reinforce that message, Obama and Sasha swam in the Gulf’s waters on Saturday, according to White House spokesman Bill Burton. The highly anticipated dip was away from the media’s view.

Obama said his family planned to “enjoy the beach and the water â€” to let our fellow Americans know that they should come on down here.”

The first family ventured to Lime’s Bayside Bar & Grill, where they relaxed on an outdoor deck overlooking the water and ate a lunch of fish tacos, chicken tenders and burgers. After a quiet afternoon at their beachfront hotel, the Obamas headed into town for a family miniature golf outing.

Nine-year old Sasha stole the show, hitting a hole-in-one off the first tee, much to the delight of her father, an avid golfer.

“That’s how you do it!” the president exclaimed, before shooting par with his two strokes on the first hole.

The White House scheduled the trip after facing criticism that the president wasn’t heeding his own advice that Americans vacation in the Gulf. Obama has vacationed in North Carolina and Maine this year and is heading to Martha’s Vineyard, off the Massachusetts coast, later in August. Mrs. Obama also traveled to Spain this month with Sasha.

Gulf Coast residents and local officials are hoping the president’s stop here will jump-start the tourism industry, which has been reeling since the spill. Although only 16 of the 180 beaches in the western part of the Panhandle were affected by the spill, tourism officials say many potential visitors have stayed away, deterred by images of oil-slicked waters and tarball-strewn beaches in other parts of the region.