Hardly a Close Ally, Clinton Teams With Obama to Raise Cash and Votes 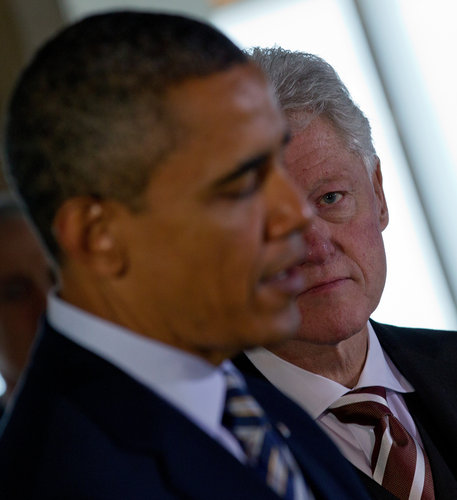 WASHINGTON â€” Four years ago,Â Barack ObamaÂ wrested control of the Democratic Party after portrayingÂ Bill ClintonÂ as a symbol of small-ball ambition and outdated politics. Now, as president, Mr. Obama is turning to his Democratic predecessor for help as Republicans breathe down his neck.

The 44th president is enlisting the 42nd president, both as a historical validator of his own leadership and as a PIN code to one of the richest A.T.M.â€™s in American politics. Rather than viewing him as a relic of the past, Mr. Obama is embracing Mr. Clinton as a party wise man who can reassure both the general public and the well-heeled benefactors needed to win re-election.

The last three days have seen a remarkable confluence of the two presidents, despite a fraught relationship. On Friday, Mr. Obamaâ€™s campaign released a video narrated by Mr. Clinton testifying to the boldness of last yearâ€™s decision to send helicopters deep into Pakistan to kill Osama bin Laden. On Sunday night, Mr. Clinton joined Mr. Obama for a fund-raiser intended to tap the former presidentâ€™s formidable donor network and marry two wings of the party that have coexisted uneasily since their 2008 showdown.

â€œYou guys get two presidents for one, which is a pretty good deal,â€ Mr. Obama told the guests at the fund-raiser.

David Axelrod, Mr. Obamaâ€™s longtime strategist, said the joint efforts show that the two men have forged a strong relationship over the last four years. â€œWhen youâ€™re president, there are very few people to whom you can turn who really â€˜getâ€™ what the job demands,â€ Mr. Axelrod said. â€œPresident Clinton has been the source of very good advice, and very meaningful support.â€

Privately, Democrats portray the evolving alliance as more utilitarian. â€œOnce Obamaâ€™s out of office, I doubt theyâ€™ll take family vacations together,â€ said a former Clinton aide who has also worked for Mr. Obama and asked not to be named to avoid offending either man. â€œBut Clinton thinks itâ€™s critical for the country that he gets re-elected, and will do whatever he can to see that that happens.â€

Another Democrat who has worked for both men said: â€œThereâ€™s no love lost. But Bill Clinton is not stupid. He knows if he can give a little of his 60-percent-plus approval rating halo to Obama, and Obama does well, that only helps Clinton. And it helps the missus if she wants to run.â€

Hillary Rodham Clinton, who lost the Democratic nomination to Mr. Obama in 2008 only to join his cabinet as secretary of state, has made clear that she will step down after this term no matter what happens in the fall election. But in recent months, people in the Clinton orbit said she has left the door more open to running for president again in 2016, a campaign that would benefit from Mr. Obamaâ€™s good will.