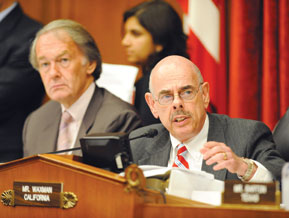 The California Democrat, along with Rep. Ed Markey (D-Mass.), will force top oil executives to defend or condemn industry practices and profits, according to series of pre-hearing questions obtained by POLITICO, foreshadowing an intense, made-for-TV hearing Tuesday that could create an iconic Washington moment for the petroleum industry.

â€œWhat is the maximum worst-case spill scenario [your company] is prepared to respond to from offshore oil operations in the Gulf of Mexico? Please outline the emergency plans you have in place to deal with deep-water blowouts,â€ reads one of the 15 questions delivered to the five biggest oil companies. Another probes the companiesâ€™ attitudes toward cap-and-trade proposals for limiting carbon emissions.

BP may be first in the line of fire, but experts said the whole industry will be on trial Tuesday. Executives from BP, ConocoPhillips, ExxonMobil, Shell and ChevronÂ are scheduled to testify.

â€œIâ€™m not sure the industry has grasped how much this is going to hurt them in the long run,â€ one energy lobbyist told POLITICO. â€œTheyâ€™re still seeing this as a BP problem. Thatâ€™s not a good place for them to be.â€

The bottom line: Oil Week in Washington â€” complete with CEO testimony, a presidential address to the nation and the release of damaging documents about BPâ€™s safety record â€” may represent a turning point in the way the public views the domestic oil industry if Waxman and the White House succeed in their efforts. Longtime environmentalists like Waxman see the oil spill crisis as their moment to put the industry on its heels after decades of having its way on Capitol Hill â€” much like Waxman did with the tobacco industry in the 1990s.