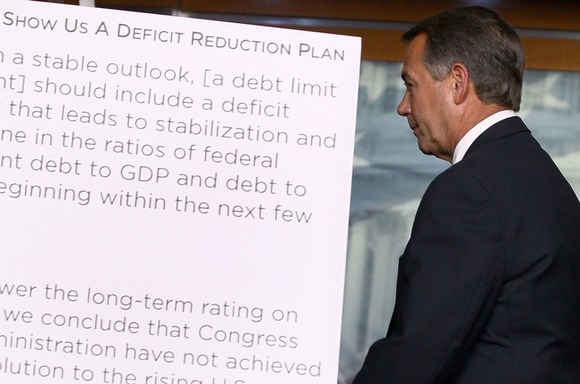 The House of Representatives on Tuesday passed a Republican-backed plan to extend the nation’s borrowing capacity in return for a cap on future government spending and a balanced budget amendment.

The vote on the so-called “Cut, Cap and Balance” plan was largely symbolic, called to give voice to the conservative majority that has refused to compromise with theÂ White House on raising the debt ceiling. It passed 234-190, withÂ Democrats largely united in opposition.

The proposal would cut spending by $111 billion in 2012 and cap future outlays to 19.9% of the nation’s gross domestic output. It also would require that Congress send a balanced-budget constitutional amendment to the states for ratification, a lengthy process.

SomeÂ Republicans who voted no did so because they oppose any increase in the debt ceiling, even with spending cuts.

The plan is all but certain to stall in the Democratic-controlled Senate, and Obama has threatened to veto it should it reach his desk. But it now clears the way for a final round of negotiations aimed at settling on a consensus plan that could move through both chambers.

Earlier Tuesday,Â President Obama said he planned to call Speaker of the House John A> Boehner (R-Ohio) after the vote to invite the parties back to the White House.

As the House debated its plan, the so-called Gang of Six senators outlined the framework of a new proposal that appeared to revive the chances of a “grand bargain” that would achieve significant deficit reduction through both spending cuts, entitlement reform and new revenues.

Obama signaled he could embrace such a plan, saying it matched his call for a “balanced approach.” Boehner countered that it resembled proposals that had been rejected during previous White House negotiations.

ButÂ Eric Cantor, the House majority leader who had pulled out of early White House negotiations in opposition to tax increases, said it “does seem to include some constructive ideas.”

Members of Congress are likely to remain in Washington through the weekend, with the clock ticking for legislation to raise the debt ceiling to be introduced so that it could pass by the Aug. 2 deadline issued by theÂ Treasury Department.

A new NBC/Wall Street Journal poll found that all parties would share in the blame if the debt ceiling is not raised and the government defaults — 39% say they’d blame Republicans in Congress, while 35% would blame Obama and Democrats in Congress, and another 17% said each side equally.