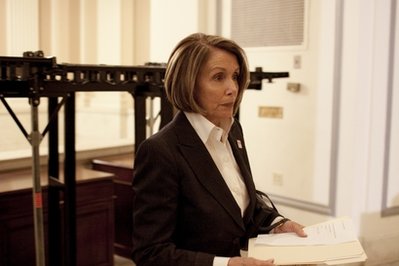 Republicans condemned Pelosi’s idea — in which House members would make a final decision on broad health-care changes without voting directly on the Senate version of the bill — as an abuse of the legislative process.

House Minority Leader John A. Boehner (R-Ohio) called it “the ultimate in Washington power grabs.” Pelosi shot back: “I didn’t hear any of that ferocity when the Republicans used this, perhaps, hundreds of times.”

Off Capitol Hill, parliamentary experts of both parties said the tactic has been used with increasing frequency in recent years by Democrats and Republicans alike, usually earlier in the legislative process. And political analysts wrangled over whether the use of the “self-executing rule,” also known as a “deem and pass,” would further antagonize an electorate whose enthusiasm for Democrats has dimmed in the past year.

Legal scholars disagreed about whether it would be a constitutional way to pass the legislation. Yet even critics said they doubt that the procedure would put the measure at risk of being struck down by the courts.

“I feel pretty confident it is unconstitutional,” said Michael W. McConnell, director of Stanford Law School’s Constitutional Law Center and a former appellate judge appointed by President George W. Bush. “What a court would do about it is a murkier problem.”

The debate centers on a parliamentary technique that is a variant on the “rule” that the House adopts for every bill that comes to a floor vote. Rules define the ground rules for the vote, including amendments, length of the debate and other terms. Under a self-executing rule, the House essentially agrees that a vote on one measure is tantamount to, or “deemed” as, deciding on something related.

In this instance, the self-executing rule would say that the Senate’s version of health-care legislation would be deemed approved if House members adopt a set of changes to that bill. The Senate then would have to approve the changes, but the original bill could go directly to President Obama to be signed into law.

Pelosi has said the process would make it easier to secure the votes needed to push health-care changes across the legislative finish line. At a time when relations within Congress are frayed, it would enable House Democrats not to be on record directly as supporting the Senate measure. House Republicans are unified against the bill.

Although the speaker has embraced the idea, a decision on whether to use a self-executing rule will not be made until the House Rules Committee convenes later this week, probably on Thursday.

Republicans sought to block Democrats’ path. Rep. Parker Griffith (R-Ala.), who switched political parties in December, plans to introduce a resolution that would compel the Democrats to conduct a regular vote. Outside the Capitol, hundreds of conservative activists affiliated with the “tea party” movement gathered to protest the health-care legislation. They seized on the parliamentary method, with demonstrators shouting “treason.”

At the other end of Pennsylvania Avenue, White House press secretary Robert Gibbs sidestepped the question of whether Obama supports the “deeming” approach. The president called on Congress last week to move forward with an “up-or-down vote” to redesign the health-care system. Gibbs told reporters Tuesday: “You’re going to know where people are on health-care reform, and where they are on the president’s proposal on health-care reform.”

Close watchers of the debate were divided about whether the parliamentary strategy would influence public sentiment about the legislation — or its Democratic supporters.

Robert L. Laszewski, a consultant who follows the politics of health care, predicted that the effect would be negligible, because Americans’ views on the subject have solidified. Democrats “are pushing through Obamacare,” he said. “You either like it or not. . . . There’s not a lot of subtlety. Either people really want this to happen, or they think it’s incredible arrogance. I don’t think there’s anybody in the middle on this.”

On the other hand, Stuart Rothenberg, a nonpartisan political analyst, said the current stage of the debate is a rare instance in which the public is focused on the process of legislating. “Voters are aware it’s been pulling teeth,” he said, adding that some Americans think Congress’s Democratic leaders had “to give away the store to get even Democrats to pass it” and, more recently, resorted to a “reconciliation” procedure that requires fewer Senate votes to pass.

“From there, we’ve leapt to a totally different planet with this deeming,” Rothenberg said. “I feel like I’ve fallen through the rabbit hole: ‘Oh, they are going to not pass the bill and just pretend they passed the bill.’ ”

Parliamentary specialists said there is ample precedent for self-executing rules. Thomas Mann of the Brookings Institution said congressional leaders of both parties are using the procedure more frequently, with 36 instances under the last Republican-led House, in 2005-06, and 49 during the immediate past session, when Democrats were in control.

Donald Wolfensberger, a former Republican staff director of the House Rules Committee who now directs the Congress Project at the Woodrow Wilson Center for Scholars, said this use of such a rule would be unusual, though not unprecedented, because it would send part of what the House would be voting on — the bill already approved by the Senate — directly to the president.

Wolfensberger said self-executing rules often have been employed at an earlier stage, rather than for final passage of a bill. He said he knows of four instances when a measure that was deemed to have been passed went directly to the White House. The first, in 1933 during the Great Depression, involved Senate amendments to legislation pertaining to the United States’ creditworthiness. The tactic was employed twice in the 1990s, by Democrats on a bill involving the Family Medical Leave Act, and by Republicans on a measure involving a line-item veto. Most recently, it was used a few weeks ago, when the House voted on both an increase in the debt ceiling and a pay-as-you-go budget provision.

Stanford’s McConnell said that such a procedure would be unconstitutional in this case because, in passing both the Senate legislation and the changes in the reconciliation package in a single stroke, “no one bill will then have been passed by both the House and the Senate” because the Senate still would have to approve the changes added by the House.

Charles Tiefer, a University of Baltimore law professor who is a former Democratic House counsel and has written extensively about House procedure, disagreed, saying: “This is so familiar a House procedure. . . . I don’t know anything in the Constitution that prevents the House from holding one vote for two bills. . . . Why would it make a difference?”