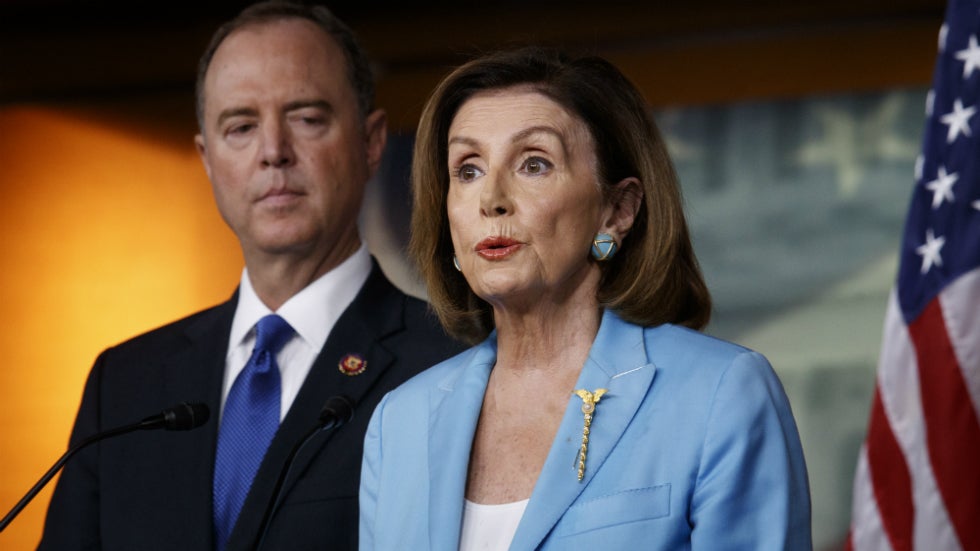 House Democrats are threatening to subpoena the White House for documents on President Trump’s dealings with Ukraine as part of their impeachment inquiry, with three House panels signaling Wednesday they plan to move forward with the effort unless they get the material.

The move represents the latest battle between the White House and Democrats, and came amid clashing rhetoric Wednesday, with Democrats accusing Trump of potential obstruction of justice and the president accusing the opposition party of seeking to damage the country.

“Over the past several weeks, the Committees tried several times to obtain voluntary compliance with our requests for documents, but the White House has refused to engage with—or even respond to—the Committees,” reads a memo from House Oversight Committee Chairman Elijah Cummings (D-Md.).

“The White House’s flagrant disregard of multiple voluntary requests for documents —combined with stark and urgent warnings from the Inspector General about the gravity of these allegations — have left us with no choice but to issue this subpoena,” it added, saying the subpoena would be issued Friday unless the White House complies with document requests.

“The White House needs to understand that any action like that, that forces us to litigate or have to consider litigation, will be considered further evidence of obstruction justice,” Schiff said. “We will also draw the inference as appropriate that they are trying to conceal facts that would corroborate the allegations in the whistleblower complaint.”

“This is nothing but more document requests, wasted time, and taxpayer dollars that will ultimately show the President did nothing wrong. The Dems can continue with their kangaroo court, the President will continue to work on behalf of this country,” she said.

Trump also lashed out in a barrage of tweets, claiming that “impeachment nonsense” was responsible for a drop in the stock market Wednesday and asserting Democrats “are willing to hurt the Country” to win the 2020 election.

“The Do Nothing Democrats should be focused on building up our Country, not wasting everyone’s time and energy on BULLSHIT,” Trump tweeted, encouraging Democrats to field “a better candidate” to go against him next year.

Pelosi insisted that Democrats could focus on legislative priorities like prescription drug pricing and the U.S.-Mexico-Canada trade pact despite the impeachment inquiry, making a point of kicking off her press conference by discussing those subjects.

But moments afterward, Trump took to Twitter to accuse Democrats of “wasting everyone’s time and energy” while calling Schiff a “lowlife” and saying Pelosi was “incapable” of working on legislative agenda items.

The latest subpoena threat comes as Democrats continue to ramp up their impeachment inquiry, which Pelosi formally endorsed last week.
Democrats have unveiled two other subpoenas in recent days as part of the inquiry, which is jointly being led by Cummings, Schiff and Foreign Affairs Chairman Eliot Engel (D-N.Y.).

The committees first issued a subpoena to Secretary of State Mike Pompeo for documents late last week. And on Monday, the committees subpoenaed Rudy Giuliani, the president’s personal lawyer, for communications documenting his involvement in urging Ukrainian officials to investigate former Vice President Joe Biden and his son Hunter Biden.

The committee chairmen have been pursuing documents from the White House regarding the effort to press Ukraine to pursue an investigation to undermine a potential 2020 presidential rival for weeks, to no avail.

The White House last week released a rough transcript of a July 25 call between Trump and Ukrainian President Volodymyr Zelensky. During that call, Trump brought up the Bidens and said that he would tell Giuliani and Attorney General William Barr to contact Zelensky about pursuing an investigation.

Democrats are demanding all recordings, transcripts, notes and preparatory memos regarding Trump’s July call with Zelensky as well as another call from April shortly after the Ukrainian leader won election. They are also asking for “the identity of all individuals who listened to, participated in, assisted in preparation for, transcribed, took notes during, or received information” about the two calls.

In addition, the lawmakers are requesting records of all meetings and communications between current and former White House officials and Giuliani, as well as Barr.

The whistleblower complaint filed over Trump’s July call with Zelensky stated that senior White House officials moved to “lock down” all records of the call, including removing the transcript from the computer system where it would be typically stored to a separate, restricted electronic system used to handle particularly sensitive classified information.

Accordingly, Democrats are seeking documents related to efforts to restrict access to records of the phone call.

They also are demanding documentation of efforts by current or former White House officials to identify or retaliate against the whistleblower, who filed their complaint in August.

Trump and his allies have publicly attacked the whistleblower and demanded to know the person’s identity.

“[W]hy aren’t we entitled to interview & learn everything about the Whistleblower, and also the person who gave all of the false information to him. This is simply about a phone conversation that could not have been nicer, warmer, or better. No pressure at all (as confirmed by Ukrainian Pres.). It is just another Democrat Hoax!” Trump tweeted Tuesday.

Schiff said that lawmakers would “do everything in our power” to protect the whistleblower amid Trump’s attacks, which he called “a blatant effort to intimidate witnesses.”

“Protecting whistleblowers is a very, very important requirement that we have,” Pelosi said. “The president probably doesn’t realize how dangerous his statements are when he says he wants to expose who the whistleblower is and those who may have given the whistleblower that information.”

The administration has so far broadly pushed back on Democratic efforts to obtain information about the president’s dealings with Ukraine.

Pompeo said Tuesday he “intends to respond” to his subpoena by the noticed date of Oct. 4, but rebuffed Democratic demands for testimony from several State Department officials.

The secretary of State said the House chairmen’s requested dates for depositions offered insufficient time for the officials to prepare and suggested Democrats may be trying to “bully” officials into testifying.

Still, the Intelligence, Oversight and Foreign Affairs committees will conduct a joint deposition on Thursday with Kurt Volker, who had served as the Trump administration’s special envoy to Ukraine until his resignation last Friday.

The whistleblower complaint states that Volker visited Kiev with U.S. Ambassador to the European Union Gordon Sondland a day after Trump’s July 25 phone call with Zelensky and met with Ukrainian officials to discuss how to “navigate” Trump’s “demands.”

Yovanovitch’s deposition was rescheduled for next Friday, while it is unclear when the other officials would appear before the committees.

Schiff, Cummings and Engel have repeatedly warned that efforts to stonewall the impeachment inquiry could be used as evidence of obstruction, something they reiterated in a letter to Giuliani, who has not made clear yet if he will comply with his subpoena.

The chairmen also said in a joint statement Tuesday that “any effort to intimidate witnesses or prevent them from talking with Congress — including State Department employees — is illegal and will constitute evidence of obstruction of the impeachment inquiry.”